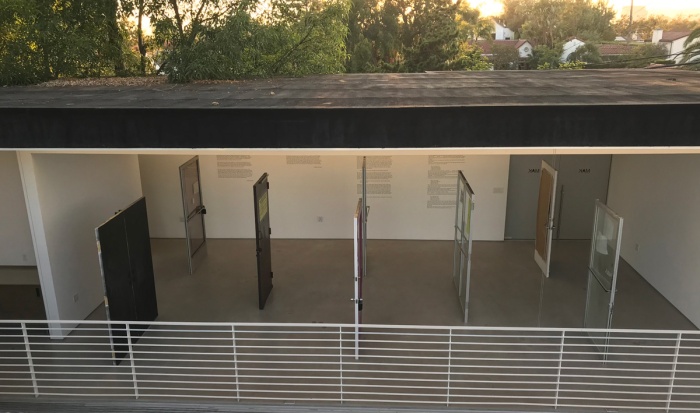 From far, they look like vertical pages separated from their book, pages that thickened enough to stand up in an empty space. They are the last page of different volumes. Volumes of a time that was.

Glass and wood and metal might have absorbed over decades after-shave perfumes, coffee steam, and smells of sweat, garlic, burned bread, beer, whisky and bad breath — “better bad breath than no breath at all,” sings Willy Nelson. That’s just me, I have a strange system of senses: enough to think about a crowded bar, I can smell it and absorb the cigarette smoke blending with the car exhaust on the sidewalk. All gone now.

But the sculptures in person still carry the hidden volume of stories moving through the doors open or closed, by the years in numbers. 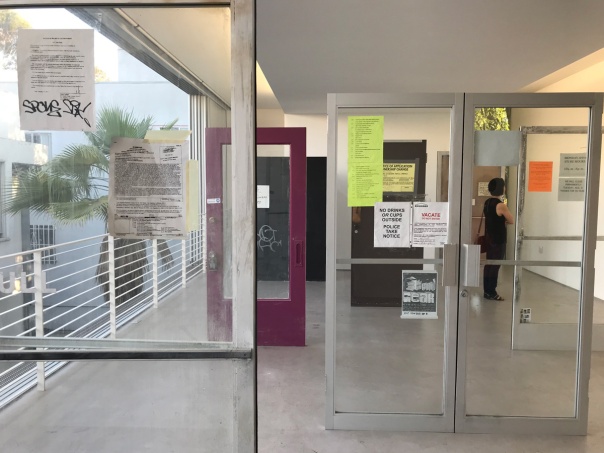 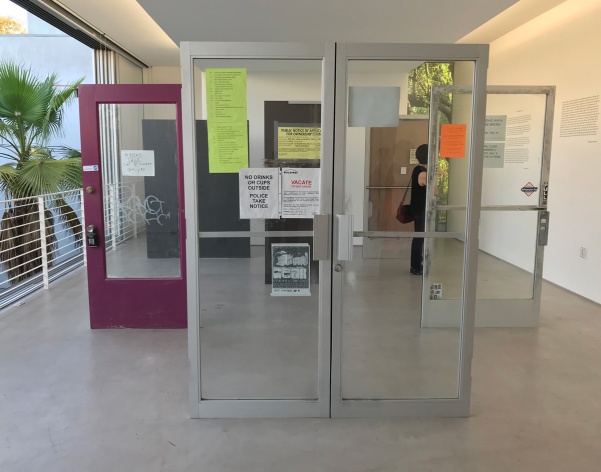 Fiona Connor remade the vertical, thin bodies as they were their last day of work, after opening and closing for people in search of food, drinks, music, eager to clasp hands, or lost in rage. She couldn’t reproduce the secret feelings each geometrical guardian shared with the fingers touching them, pushing or pulling. Music could do it, not visual arts.

Remade, opened to a new life in spaces for art, usually neat and aseptic like hospital rooms — surgery happened for sure — the inanimate guardians move in a limbo, following the uncomfortable translation into a body of language: walls and ceiling disappeared, as well as the address. The remains are a calligraphic profile. 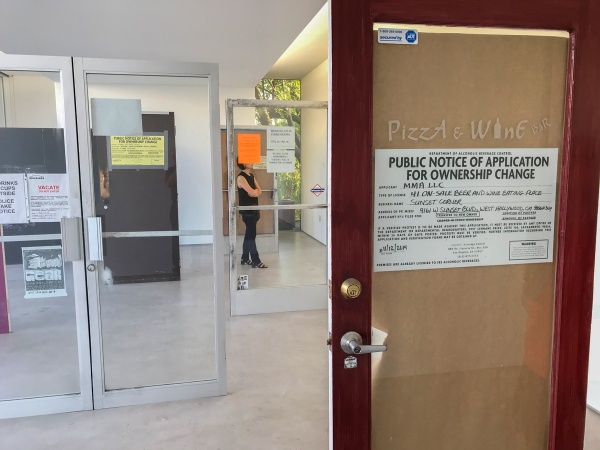 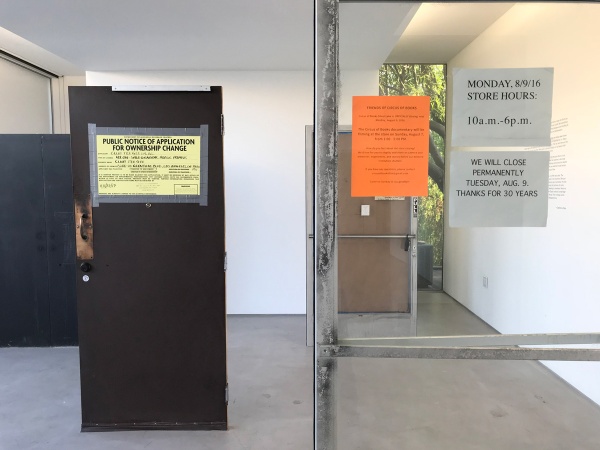 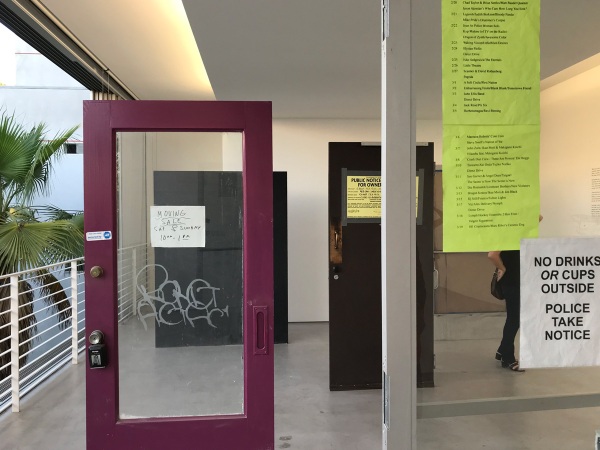 It’s a day filled with smog and smoke in Los Angeles. My vision might be blurred, but I see Fiona Connor putting together little by little faithful archival alter-egos of the original architectural elements, adding handwritten signs, eviction notices, other messages to the public, as a spider does secreting the thread for geometrical webs. And I see Allan Ruppersberg rewriting in a perfect copy on canvas the whole text of The Portrait of Dorian Gray.

As their own life goes through the time of building and making, the two artists become one thing with the process.  Once their work is done, “reality slips away from them because she is real again, and marks a distance.” Albert Camus. “Such thickness and strangeness of the world is nothing but absurdity.” They both deal with a reality which is thick and quaint; in a word, the absurdity of the physical world, which is a primitive substance refusing dominion: humans made it their own only to toss it, or forget.

Eh bien, voilà. That’s the art. To feel the growing power of natural or cultural blocks, stronger than dragons, and fight against them, or move away. Apparently protective, historical frames keep at bay any wish to move out, far from them, from their mask of permanence, even from their beauty.

Still the walls do not fall,

I don’t know why;

dust and powder fill our lungs,

through doors twisted on hinges,

and the lintels slant

that thickens to a blind fog,

then steps swiftly aside,

for even the air

thick where it should be fine

and tenuous where wings separate and open

your way of thought (mine),

each has its peculiar intricate map,

threads weave over and under

of the whole race,

but my mind (yours)

has its peculiar ego-centric

to the eternal realities,

and differs from every other

as the vein-paths on any leaf

differs from those of every other leaf

in the forest, as every snow-flake

has its particular star, coral or prism shape.

Like Hilda Doolittle, Fiona Connor is a voyager, a discoverer of the not-known and unrecorded. She has no map, nor rules of procedure. How could she bring to us the death of these social spaces without knowing what death is? She made a flat coffin for each of them, a profile. “I must find out what is moving inside them that makes them them, and I must find out how I by the the thing moving excitedly inside in me can make a portrait of them.” (Gertrude Stein) There is no way in, no way out. But they are strongly anchored in the floor, solitary skeletons offering their nakedness to the viewers, with no regrets. 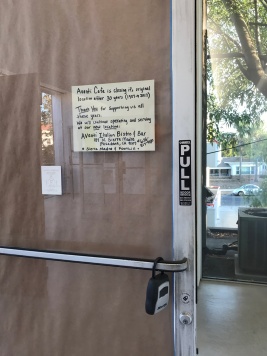 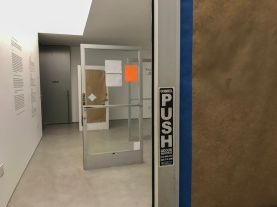