Text by Alberto Albertini edited and translated by Rosanna Albertini

By necessity the  color is forced on the canvas. Slithering on the board the brush forces that scant color to stick on it.

Faded images cooked by a still sun, drawn by weariness or by sublime detachment from the matter. The idea hung to the board, feeble. The color as well is thin not to be heavy on the essence, as if of weariness it could fall down…

I PHOTOGRAPH, THEREFORE I AM (by Alberto Albertini)

“What are you going to do with your photographs?” my friend Ralph asked me. I was embarrassed! Never asked myself about it, more disquieting questions did haunt me, the existence of happiness for instance, but not this question, despite some undeniable connections.

Why do I photograph? If I think that human works only exist when brought to the public, I did not make my photos public, does it mean they don’t exist? They exist a little bit, for that complex part of me that needs them: a need! An infinitesimal calculation, a complex equation… meanwhile, once in front of a certain thing you can’t just let her there as if, quitting without taking a photograph, you would let her disappear. As a matter of fact it could happen: if you don’t see her you can’t prove she is still there, it’s only a probability.

Beside, there’s the desire to possess, to preserve the things you have seen in a form different from memory. They can’t slip out of your eyes anymore. You are perhaps satisfied with the illusion that things are at your disposal so they placate an absolutely vague and useless, although necessary, desire. They enter an unconscious sphere to make it more lively, to fulfill your inability of properly placing the event in a check box that others have but you don’t, a check box that becomes a sort of arbitrary infinity but pleasant and satisfying for a cheap price. “What’s the message, what do you want to say with your photographs?” Nothing at all. The exterior side is there, the photograph! The pleasure of frame, forms, lights, and especially the intimate space, connecting to all the things the unconscious asks for without defining them.

And the click? An instant, and you take possession of what you see and of what escaped from you only to find it again later, when examining the photo. To stop time. My next project starts from here, if I can find the means: to go blindfolded with someone accompanying me to an unknown place and photograph always blindfolded. The problem remains of the arbitrary choice of the place made by the person accompanying me. 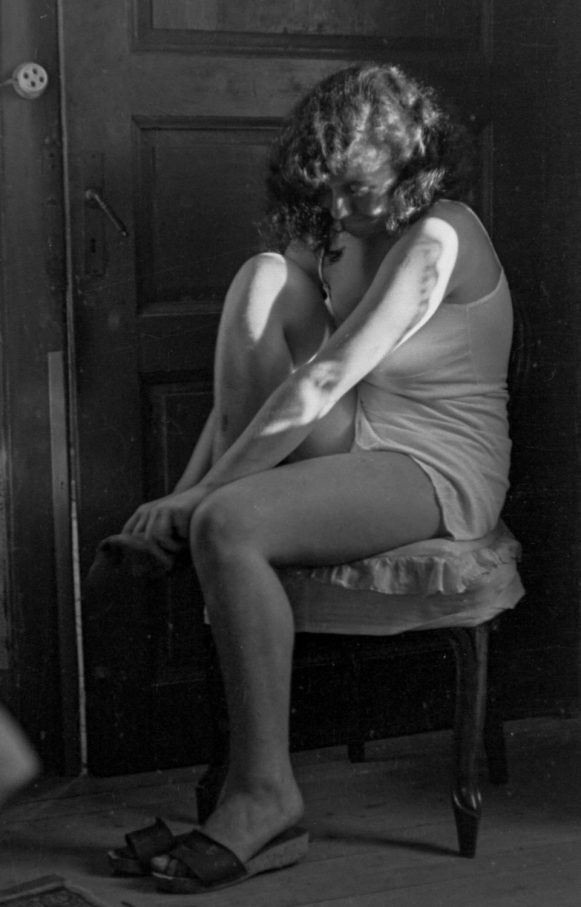 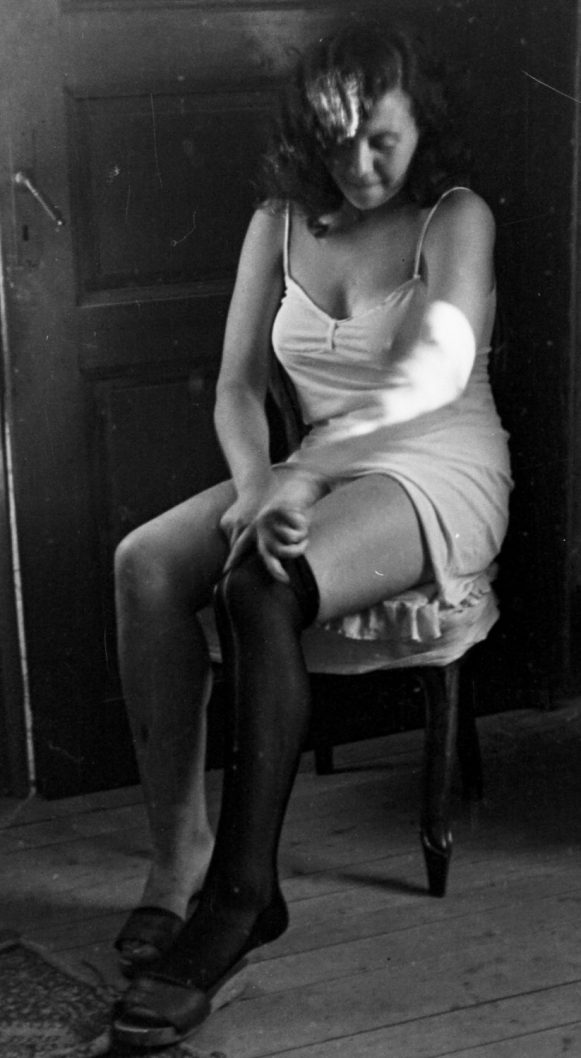 …because in my intimate veins your being will be melted…

The PC waits for me showing one of the images downloaded in sequence on the desktop. She lies on the grass, her breast swollen with milk, looking afar, not thinking? Her lips almost smiling. She is surrounded by ivy and vine leaves. Maybe there is no house around there, the road, the world.

Or in this one, her hand covers her forehead to keep the sun far from her eyes. The hair over the right cheek, regular features in her face, she looks afar… Each photograph tries to give a life to my unconscious intimate visions. Here for instance, in a clearing, she walks on a trace of a trail, the sun grazes the branches separating the clusters of leaves, then lighting the meadow and sideswiping her transparent dress, a custom made world like in the following, where she goes down steps made of crumbled stones, a useless stair because the house collapsed.

I look at the floor, a leg of the table, the light switch. I hesitate to go to sleep, I don’t like the unproductive waiting before sleep, and prepare some reasoning to reduce the boredom. Yet when I lie down I see distorted faces of non existing people, sneering monsters changing, replacing one another. Am I still awake? Did I learn how to dream awake?

Always emanation made me curious as a concept and a substance: a bulb emanates light, yes the sun as well, and light seems evident, but what is it? Uranium emanates X-rays, antennas radio waves, but untouchable, impalpable. What’s this stuff traveling through space in the absolute void, yet bringing heat from there! Women also emanate, not smells, even if, they emanate a fluxus, a mysterious perception embracing languid.

Once more today I got through the balance test: to slip into my pants standing without support, a risk, but I must know.

Like in the photograph under the two birch trees. She sits on a stone bench, the sun traces spots of light on her. She wears a dark periwinkle dress falling on her as if it was liquid, she leans indolently on the tree as if waiting. This other instead brings me back to the darkest time. A beautiful black and white portrait. The eyelids just a little more lifted look at misery, and desperation. That period comes back to me and I live in it again.

Emanation, emanation, the beginning of enchantment: the emotion of the first contact, to be together, woods, landscapes, wind, nature. An emotional storm and later she finds herself with the belly. Deceptive, absurd, it shouldn’t be allowed to cheat like that. I would have separated the two things: to make love now one takes the pill, and to make children there is artificial insemination.

Why so many photographs?  A desire of possessing maybe, the need to grab the mystery. She sits on a twisted stump among the Fregene pine trees. The sun is low and hits her face frontally, shadows bring out her figure but her expression is hard, thwarted. A double existence? The emanation toward me and her own private that I never could have discovered? Some signs, for sure, outline her personality, yet they are very far from revealing her complete character, her thoughts. I wonder, aware that I can’t answer, what kind of world is swarming in her. Did I believe I was the only one with an inner world? I never shared it, it’s in my solitary nature to keep in my intimate space, but her, in what world did she live? And did she want to share it? An unbridgeable difference could have emerged. A calculator, her projects only came up at the right moment, and at the same time she used to calculate the moves not to disturb her deep indolence that was also an invitation.

Who knows if Leopardi knew that the sparrow’s song from the bell tower wasn’t a pastime, but a sexual call? At the end of the season he would have stopped. Everything is so much slowing down! But yet I would like one more click, and for what? The fan remains over there with open arms, isolated and useless. Some light starts filtering,  while my effort to get up from the armchair is harder than the sun’s effort to raise: reading the paper makes me tired because of my bad vision, or maybe not, my autumn is more advanced than the meteorological one! The doctor prescribes to me eight different medicines, pills, capsules, drops, injections. I refuse. The doctor insists and I reply that at my age I can afford to do it, somebody enters, who? It was a dream. I believe I would do it for real.

Cati let me kiss her for 100 daisies but she was eleven and I thirteen. Rossana, years later rumors spread she was a nymphomaniac and committed suicide. Lulli, about her too people said she took her life in Merano. Fiorella was my secretary in the seventies; a hematoma in her brain left her disabled.

The rain stopped, what a quiet, I’m almost going to sleep. I looked for, but I can’t find it anymore, the goodby note by Giovanna. I knew where it was for a long time, then… it followed me all my life. We were only fourteen, what did we know? What did I know, for Giovanna knew it and wrote it: will you forget me? Victim of the macho culture at that time ruling undiscussed, I had seen the situation as my first conquest and after all, at that age, only kisses on those lips a little humid and slightly soft. It’s my impression that her text was copied from some love letters manual although this doesn’t move the problem. She said: …we loved each other… will you forget me? I never saw her anymore but her note keeps repeating to me: will you forget me? Will you forget me? So I couldn’t forget her. Being my same age, she could still be alive, perhaps it’s she who forgot me! 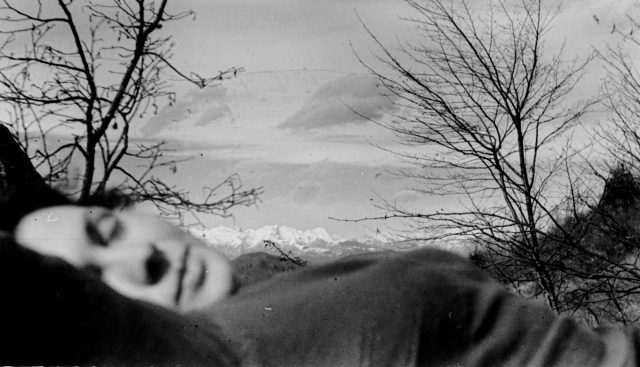