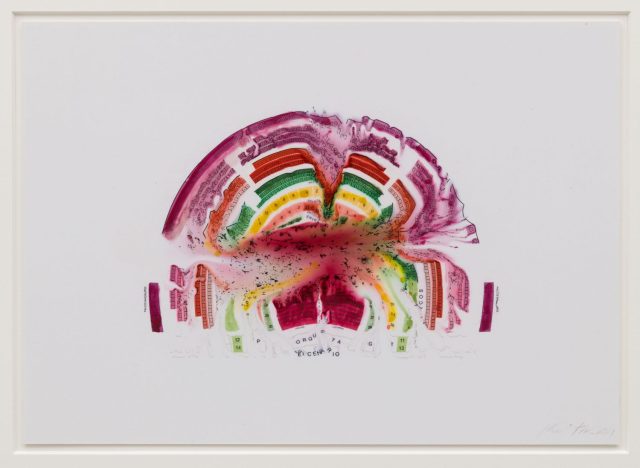 paintings are self obscuring bodies of history – John Cage

Crazy effort is ours to make sense

although making sense or giving up with it are much bigger activities than writing or speaking words.

Kuitca makes paintings and “attacks” them from inside

often they are replaced by numbers and geometrical signs for seats

he doesn’t have inspiring urgency to make art

Desire of breaking off that never kept its promise. 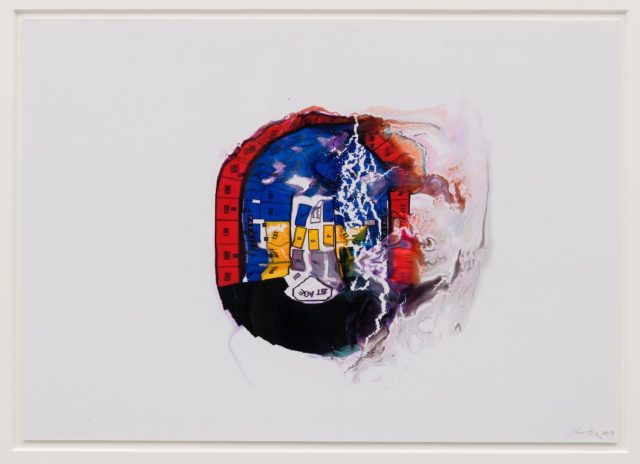 I admire the philosopher in these miniature theaters, the man walking around in his studio perhaps in search of his mind, as much as the paintings. Kuitca is right, boundaries and infinity share the same space, in paintings they join their power. The artist answers to their secret call and finds himself facing a sort of physical resistance in the paper or canvas as the composition takes form.

As this happens, he needs to attack the image from inside. There is a circular movement in the pictorial process -as Kuitca describes it-  as if the “obra,” the art piece, had her own way to assemble images and colors, and the artist was listening to the silent forms coming from him or escaping from him? “If the obra unfolds herself, -he says- she makes it chaining, not breaking.” “Despite the effort of producing big changes…what I obtain is a structure as well organized as the one that I would like to break.”

“I only can imagine stopping painting when my pictorial project accomplishes itself.”  “As if something ended and I stayed out of it.”

Numbers, prices, performances swirl in the artist’s mind as he performs as a painter. He doesn’t go beyond the map in these small theaters’ making.  He builds his own configuration no bigger than a hand, and the very idea of structure is forced to deal with the human nature of the hand that draws, paints and glues. While the architectural forms spring back into colors, their painted new life starts fighting against the order. As if it wasn’t enough, the artist floods the area over the orchestra, opens cracks in the stability of the building. The edges crumble, the center is shaken by lines that seem to activate an electric storm. The rows become black and pink feathers. 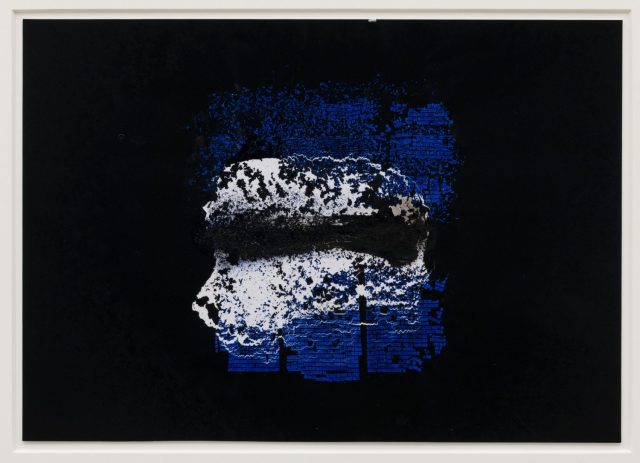 The artist, contemporary Diogenes. Instead of holding a candle in the face of the other humans, looking for the honest one, Guillermo Kuitca places and holds in front of our eyes miniature portraits of our brains. Is he challenging our own virtue? They are also pealed open heads, stripped of the usual overdressed makeup. They might be many single heads, or one, rather, disguised through different modes. It’s our inner chaos that flickers in front of us.

Don’t mistake me. We are not impenetrable safes. We are sponges breathing in and out infinite vibrations. Life of others enters our bodies like a bunch of needles, whether we want it or not.

Only literally these are theaters. They are theaters for sure, places that underwent a radical clean up from velvet, posters and decoration, as well as heads not only stripped from bones, hair and lipstick, also deprived of intellectual pride, that cloud of purity we honor, some times, to forget we are guests of a supreme intelligence which is our body, the magnificent container of growth and decay, under the will of time.

Each theater replicates the map of an existing theater, but the title of the painting  is UNTITLED.

Cynical like Diogenes, I like to drink in the cup of my hands. My eyes absorb the painted images in the same, simple way. It’s a new experience in front of each piece. I see numbered seats mutate into entangled neurons, loosening like pieces of thread cut into the seam. My own neurons curl up, still hurt by the pain I encountered on the sidewalk this morning, waiting for the bus. A man asked me for money for the fare. His eyes met mine only once, for an instant. Here it is, I told him, and tried to talk with him. He kept his face down until tears dropped, heavy like lead. A few words from him revealed he had just lost wife and two children, all dead. The only remains of his life were in his gray, double suitcase. His tragedy has become mine. Inner life is life of others. We obey life as this painter who is very dear to me obeys the obra, the work he does. A new world comes out of it. Pain is not hidden. Which creates disruption, uncertainty, and a lot of unknown.

The space we share, in front of his paintings and every day, on the road.

Everyone probably experiences something different.

WITTGENSTEIN with one alteration: “painting” instead of “proposition”

A  painting … does not actually contain its sense, but does contain the possibility of expressing it. …

A painting contains the form, but not the content, of its sense.  (Tractatus, 3.15)