LIGHT AND FLEXIBLE, WITH NAILS

March – April 1968:
“I do not respect Johnson, I do not respect the masters.
I’m not available anymore because I want to start from scratch.
I could still be available to a child, but not to a man, no.
If a man asks me to do something, I do it the way I want to.
I no longer believe in catalysts* because they are the beggars of slaves.
At present the world is peopled by slaves, and catalysts are still around.
I’m not interested in power or career; only myself and the world.
I can do little, very little.
I’m battling against malice and competition.
I cannot escape the reality I see.”

(*catalyst, the prime agent of any change or action.)

Despite her official position in Arte Povera’s historical dress, I want to unravel this ninety year old Italian artist from any cocoon. Just her and reality around her in Turin, from what I remember, also around me in Milan, the same years when she was knitting little nylon shoes like clouds ready to fly, joining the green of the grass to the light blue of Northern sky, as if colors did make the shoes for a walk in the void. Mid sixties. I was wearing comfortable boots to run faster during the police-student confrontations. I was a philosophy student, and clouds were in my brain.

No wonder Marisa Merz dislikes catalysts, they were nailing our minds to ideological boxes, heavy like lead, separating the mind from the rest of life. Marisa was building around her an undefined space, a hole in between art and life. The same way that Robert Rauschenberg considered the adventure of painting, or of art making in every way. Doors, tables and chairs are a population of hopeless objects, condemned to only one form forever. There is not much she can do about that. But she can surround them with natural or artificial shadows to soften their rigidity, and approach them to the human touch, helping them to escape from their destiny. Sometimes the shadow materializes in knitted, transparent shadows moving squares and rectangles from the floor toward light triangles pointed to the ceiling, becoming smaller and smaller, she can do little, very little. Yet, out of her hands, stools can dream of a kite and a wooden door plays with the illusion of softness of squared empty pillows made with copper wire, as if opening a new mode of being for a door, opening and not only closing. 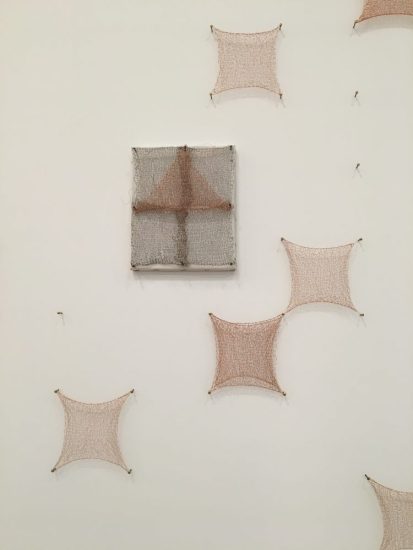 Any connection between the art world in the sixties and seventies and the student movement was absent. And Marisa Merz seems to me now much closer to Piero Manzoni personal mythology than to the Arte Povera heroic answers to the growing search for perfection and technocracy — rationality in modern societies turning into sickness. Although married to Mario Merz, the sculptor who built powerful forms like bubbles of thought impenetrable to the viewer’s body, Marisa kept her feminine instinct intact. Yes, her tables wrapped in veils bring a sense of isolation, although adding, at the same time, the absurdity of a dream that could be of freedom, or just of care. Her little sculpted heads look at the sky. Humans are the invisible bodies dissolved around her pieces, leaving their scent. 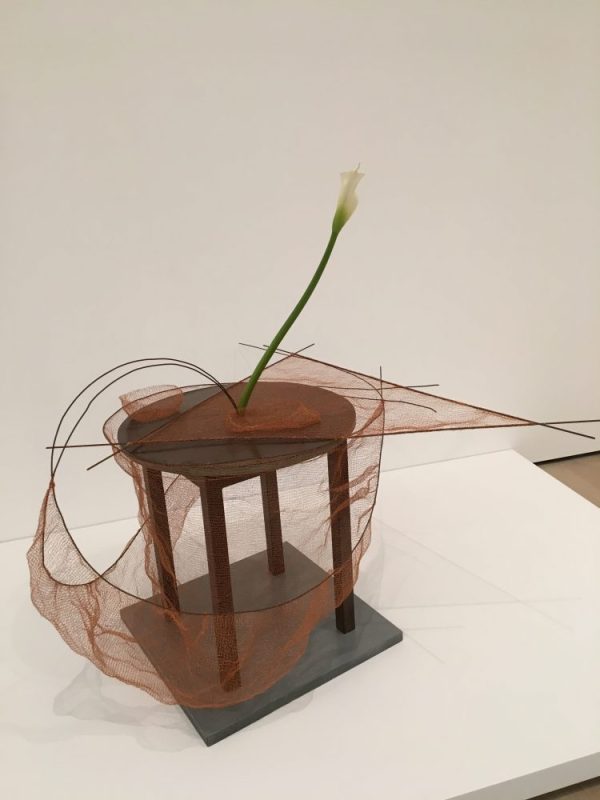 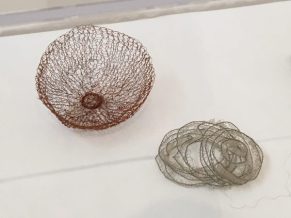 “The more we are immersed in ourselves, the more we are open; when we approach the earliest signs of our totality, we also approach everyone else’s totality. The difficult task is to liberate ourselves from foreign and superfluous things, facts and gestures that pollute the compact units coming from the art of our days and easily becoming the emblems of artistic fashions.”

“Nebulous memories from childhood, impressions, abstractions, sentimentalisms, deliberate constructions, pictorial symbolic or descriptive intentions, fake anxieties, undigested unconscious events, the perpetual hedonistic repetition of already explored subjects: these are things to be discarded. The process of revelation and elimination releases our original quality in the form of images: images that are primary, and the ones of our time gushing out from the same point, for us and our civilization. Nothing must be avoided to accelerate the emergency, the urgency of acquiring our own gestures.”
PIERO MANZONI, Prolegomeni all’attività artistica.

A point in time: the soil suddenly trembling under my feet trodding on the sidewalk from Piazza Fontana to Piazza del Duomo, in Milan, on December 12, 1969. The bomb’s explosion didn’t make much noise. It was behind me, where 13 were killed and 88 injured. I was not one of them by only a few seconds. I didn’t turn, a wave of danger pushed me quickly walking away toward the Dome, my heart beating fast. It was like wearing Marisa Merz’s green shoes, and feeling the nails. In minutes, the place was filled with ambulances.

A few days after, the daily paper reported that Giuseppe Pinelli, a well known anarchist, had fallen from a window at the police station. He had been accused of placing the bomb. A dead angel to me. As many of my friends, I used to go to his house where his wife Licia typed academic papers for us. We were bad typists, I still use two fingers. Two little girls running around us. It was an odd time, of idealism killing people. As if the amazing theories we had tried to digest had turned fleshy, back to their sprouting from vital organs, and were made softer, gentler by human frailty. The empty carcass of words crashed with the anarchist body on the asphalt, after the flight through the void. What happened exactly, we never knew. Except, Pinelli was innocent.

We did not know that artists had turned our precious thoughts into metaphors, actions, questions about human identity, as effectively as our philosophical castles. Marisa Merz, for instance, worked on our broken threads, moving the line into hand made, often knitted objects. They embody flexibility, adaptation. They bring a soft hand on reality.