an art piece by Sylvia Salazar Simpson to celebrate her mother 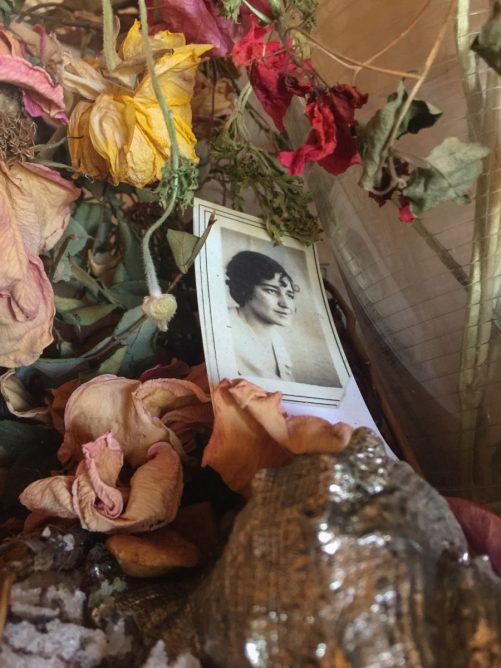 ( Images of “Mi mamà era preciosa” in the final configuration)

Poetry, poetry, is a gesture, a lanscape,

your eyes and my eyes, girl; ears, heart,

the same music. And I say no more, because

no one will find the key that no one has lost

And poetry is the chant of my ancestors

a winter day that burns and withers

this melancholy so personal.

Sylvia’s poetry is visual. It comes from moments and days that don’t sit in the memory, nor are they saved in a notebook. Time particles lacking the illusion of shape or names. Time is one name without a body. It’s hard for me to distinguish it from another strange name, life. Yet, both of them are the source of Sylvia’s attachment to decay as one of the most impressive, stirring and surprising living processes. A rosary losing pearls. Petals and fruits softened by their lack of effort in keeping their self separate from natural dissolution, and from human disillusion. Showing the decay as a body of marvels, Sylvia the artist reveals the physical apparition of time, and it’s a phantom. 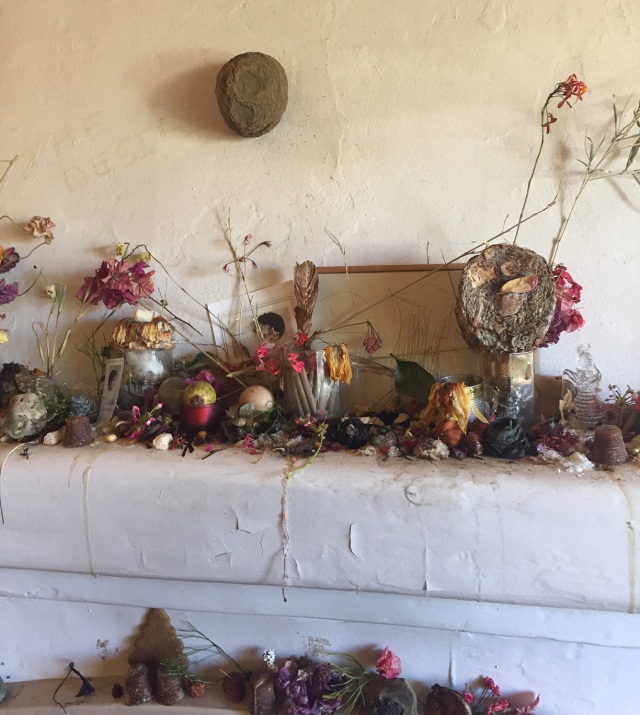 ALLAN KAPROW      “Just steps along the way, and the artist’s eyes may have opened up a little…”

“But let’s say that art is a weaving of meaning-making activity with any or all parts of our lives.”

SYLVIA SALAZAR SIMPSON      “I had received some photographs of my mother. I reproduced them but didn’t want to put them on the wall. In the meantime the mantel of the fireplace accepted to receive some Indian globes, at the edges. On a round table adjacent I started to place flowers in glasses, with water. An old wrinkled squash and giant fresh Persian lemons were added to the globes. Persian lemons have a fungus on them that lets them rot quite rapidly. Some are green, some black. They were followed by pieces of bread from a Eucharistic celebration, and pieces of cedar. My mother crawled into the piece. It was appropriate for her to be on the wall, but her photographs wanted to be in the piece. There is a small owl. Some flowers were removed, or replaced, or added every day for fifteen, sixteen months, starting in April 2017. Drippings were done at Christmas to make beads and small candies shine for the day. They were drippings of piloncillo sugar liquified. My mother was a very proper person. The contrast of the baroque decay and her image is what makes the piece. The piece is a small offering, a celebration.” 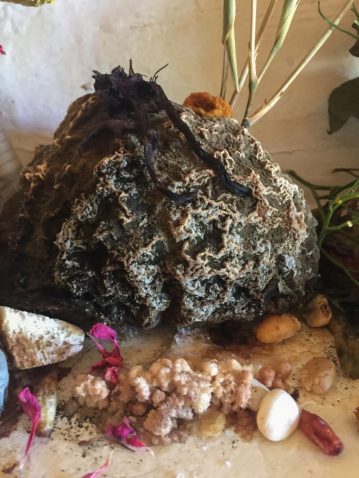 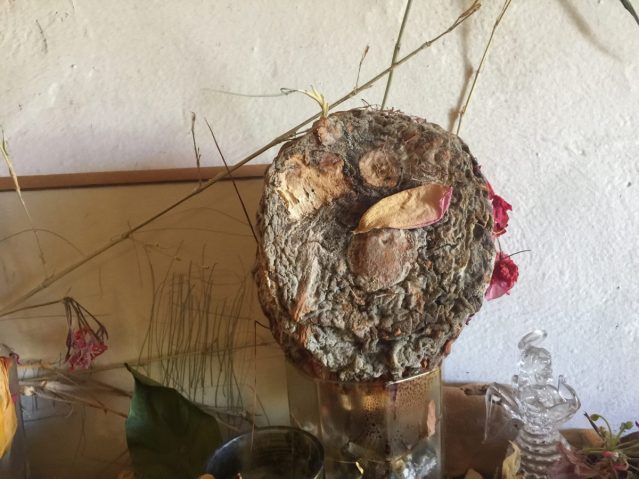 Not only a celebration of Veneranda, also a salutation to

“The greatness of every day life, and above all its details, the sparkle of flames, eyes, hands”

as in the South American poem by Elicura. Eyes must become hands to approach Sylvia’s pieces, hands and tongues, two imaginary mouths opening when the moon fades and the sun is still pale, chewing and swallowing what the day brings, and at night, closing the gate of  teeth. Past and present are only one canvas. Dates, facts, would make hole and cuts in it as in Burri’s paintings. Family stories are a mirage from her childhood spread by words of the old women of Veneranda’s house in New Mexico, and later by Veneranda herself in Mexico City. 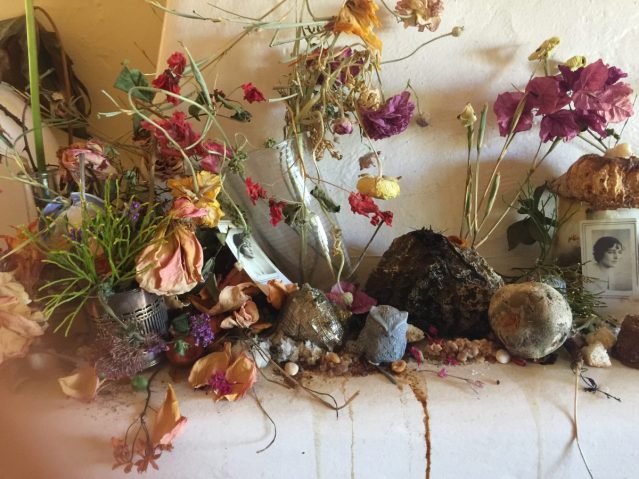 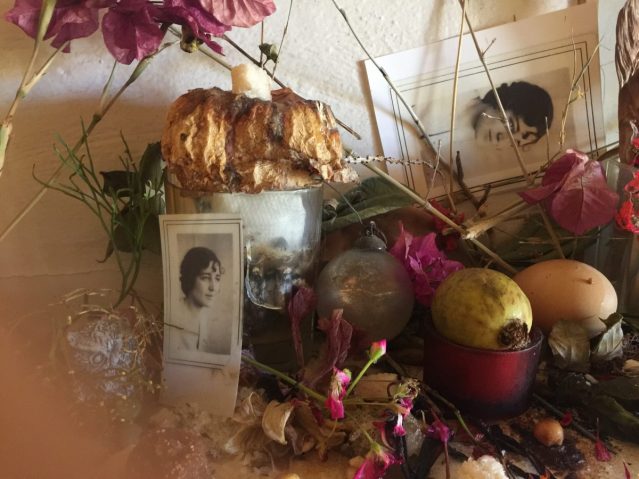 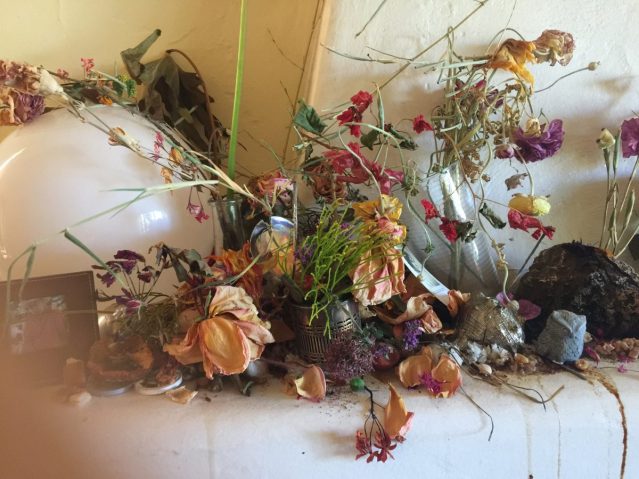 There is a pond of blood in their memory

went to New Mexico with the first settlers coming from Mexico

child to be born in that part of the world

they came with a land grant

they had received from the king of Spain

not without disputes with the local Indians

Indians had their feet cut off

a puritanical morals in the house

more and more children were born

and when Sylvia arrived she was told

she was better than darker people

so when she grew up an adult woman she

embraced the darker people’s side and started to say

about herself “I am Mexican”

it’s an art-making for her

poverty and art were inseparable in Mexico City

where Veneranda lived with her husband and children

she sat in the park with them and taught

them to draw and to revere art

metal or silver hearts, candles, flowers and food in front of them

every thing as real as light through the window

as if raining sparkles of gold

On the round table near the fireplace a jungle of dry and fresh flowers, candles, glasses, fruits, sticks of wood, almost cover an odd piece of wax: Silvia’s foot cut off and changed into a candle. 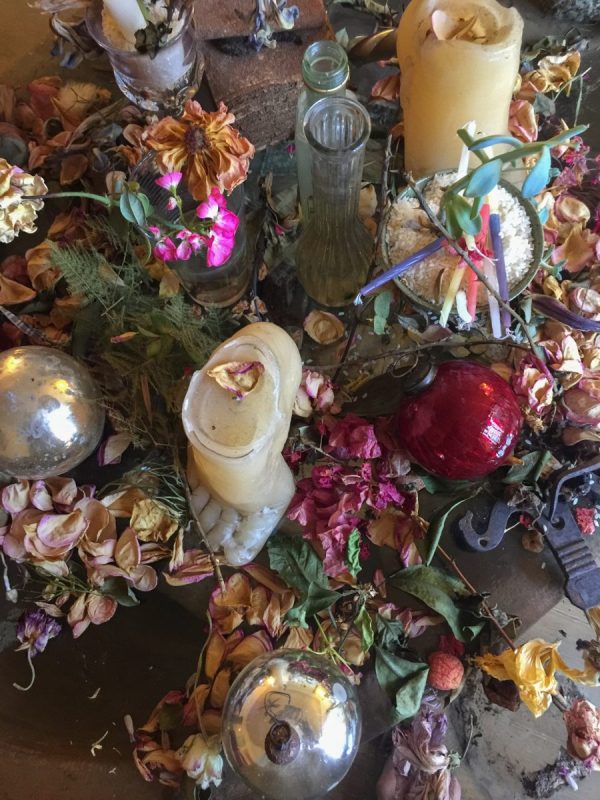 “Do you know my mother’s last words?” Sylvia told me years ago. “She suddenly woke up from her quiet absence and asked me, ‘what time is it?’ And I thought, in myself, the time to die.”

She died, — this was the way she died;

And when her breath was done,

Took up her simple wardrobe

And started for the sun.

Her little figure at the gate

The angels must have spied,

Since I could never find her

Upon the mortal side. 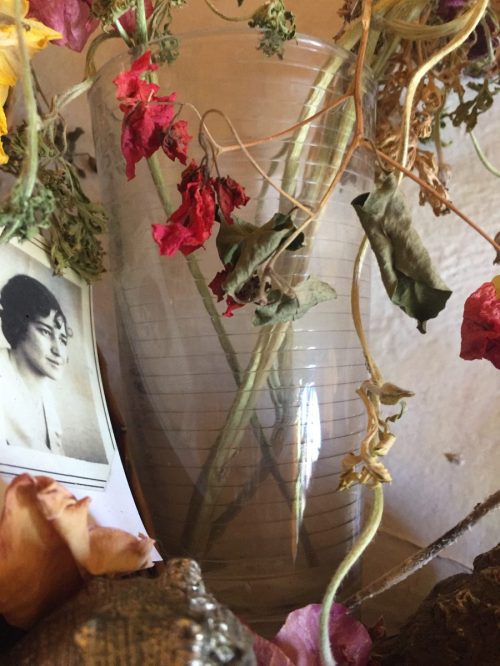 Allan Kaprow, Essays on The Blurring of Art and Life, University of California press, 1993

Elicura Chihuailaf, Two poems on Poetry, in Technicians of the Sacred, edited by Jerome Rothenberg

“Elicura Chihuailaf Nahuelpán (his fill name) has been referred to as the lonco, or chieftain, of mapudungun poetry, and works at recording & preserving the oral traditions of his people. Elicura is from Mapudungun phrase for ‘transparent stone,’ Chihuailaf means ‘fog spread on the lake,’ and Nahuelpán is ‘tiger/cougar.’ ”