I see Joel in trouble and I like him there. Because his journey on the same road back and forth for 40 days has the same distinct property of a religious ritual,  including the dress of a baseball player, the big glove and the white ball. If such is the case, the roots of his journey are as ancient as those of the migrants’ peregrination, driven by their overconfident heart despite all the obstacles that a human mind can conceive in advance.

A primitive desire moves them both toward an uncertain goal, against safety or reasonable solutions. All the Indo European fairytales contain the same kind of quest: go, says the little sister to her brother, and bring me the fountain of the silver water. The boy goes, and helped by the vision of an old man, he succeeds. Now the girl wants the white parrot, who can only be grabbed when his eyes are open, which means he is asleep. If the boy fails, his body will be petrified. And so he is.

Ahead of themselves, the questers do not know what will meet them during the quest. The artist could feel the spell spread by the wall and have a moment of stillness, hoping that the white geese/swans in the sky would lift his soul.

I’m translating this contemporary journey into the words of a timeless story:

take me on your wings…”

“Wait for those that are coming behind us” answer the birds.  Same request to another flock, and same answer, “Wait for those behind us.” At this point the artist prays. He becomes exactly like the hero of another story, about to die in the castle of nothingness. After failing to hit the target twice, he closes his eyes and whispers: “May no one miss the goal of his life as I have done!” It is then that his arrow hits the white parrot. Old interpreters knew the white parrot was nothing but his soul, and the journey was spiritual.*

I don’t have any doubt that this is the nature of Joel Tauber’s quest. Collecting  stories from migrants, border patrol officers, passing people, he builds the wings of flying bodies for visions or pages. And he breaks the spell of the stalled hopes: “Now, tell me who you are now, give me your heart wounded by offenses.”

He is building a future memory that will not say: “I can’t pick you up, ask somebody else.” It is simple, as Viktor Sklovskij wrote:

“A person can’t lift herself by herself alone, and she asks to all her forebears who thought and dreamed, those who got indignant, those who have been reprimanded; the person talks to them, when reading [or watching a movie]: bring me with you!”

“Animals disappeared, words changed, but the big electric machine of human self awareness, a thinking machine, shakes the sky with multiple wings, humans are part of that. A writer is the apprentice among humans. Writing is impossible without working, without reading, without looking at the flocks of geese and swans that, population after population, school after school, fly over you and in the end will bring you on their wings.”** 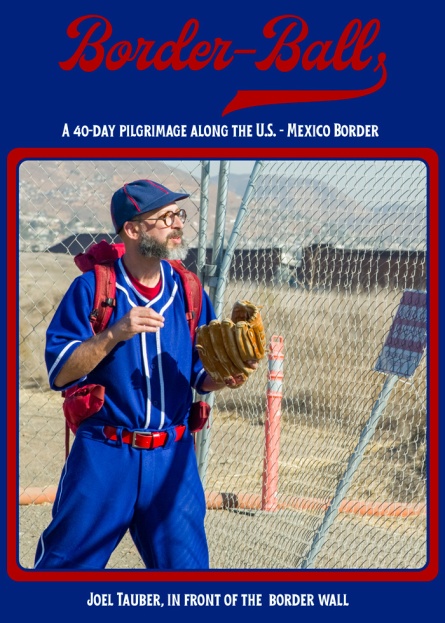 I’m continually confronted by the Border Wall. I walk alongside it everyday, while making my 40-Day Pilgrimage from the Otay Mesa Port of Entry to the Otay Mesa Detention Center, and then back again.

The Wall seems most imposing to me from the easternmost point of my 7 mile route before I head north towards the Detention Center. The towering metal barricade marches seemingly forever east, past the horizon line. I stare at The Wall, but I cannot touch it. I face it behind a second shorter metal fence and a restricted buffer zone of highly patrolled land.

I stand at this spot, tossing a ball and thinking about The Wall. I interview people about the border and about baseball, and I toss a ball with them. I talk to Border Patrol agents nearby. Then, I toss a ball to myself some more.

And I wonder. What does The Wall do to us? Psychologically? Ethically? Spiritually? What happens when we emphasize, so clearly, the boundaries between us? When we heighten them with steel, rebar, and concrete? Does The Wall make it harder to recognize that we’re all connected to each other? That we’re all on the same team?

I continue to toss a ball, over and over again. As a ritual. As a meditation. As a prayer. I think about our teammates who are suffering. The hungry. The homeless. The refugees who we turn away. And all those we lock up in detention centers.

Walk with me along the border. Play catch with me in front of the wall. Share some hot dogs and salsa. I don’t care what part of the world you’re from. Let’s root, root, root for teamwork. If we don’t find some, it’s a shame. For it’s one, two, three strikes, we’re out at the old ball game.