After a life spent hiding his paintings in a wood shed, Paris became his scent of the rose for two years, then he died: it was September 2007

This post is dedicated to all the ‘invisible’ artists who steadily grow on the forest floor of the artworld. Often not known enough to be forgotten. Al Payne not only built his sheds, he filled them with paintings and the human scape the paintings contained, a physical density needing protection, not to be exposed to a price that could be money or intellectual evaluation or both. The colors of life, sounds and feelings collapsed, maybe, so inseparably into those pantings that the artist locked them into his inner space. He did not cut the umbilical cord.

Allan Kaprow would say, “His act is tragic because the man could not forget art.” And yes, Al Payne sacrificed himself in a romantic dream of purity, dragging his artworks into his tomb before death. It would be easy to misunderstand. Only an extreme love for life leads to such a secretive activity. Or the discovery that life, and art, are in big part beyond concept, “enactment of hope” out of heartbreak and failure. He did not want to break the common roots that keep a person and her art in only one body.

Attempt at conjuring the unthinkable thru painting.

1987-2001 – reaction to cancer, light and passing of time, family as subject-drawings, paintings pictures of family, home. Focus on here, now. 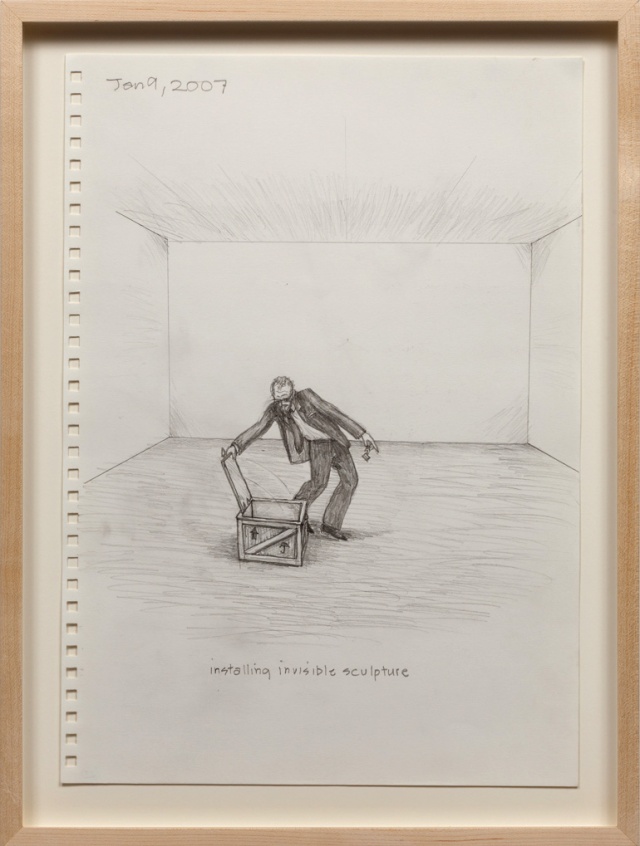 Paris Late ’00 seems to be a NO TIME for Al Payne in Paris, his metamorphosis from the American inchworm to an elegant butterfly. A space of existence not needing to be measured. A taste of history, beautiful people, new food, a lot of white buildings under a sky shading walls and pavements with different clouds at every hour. An upsetting light. Often for lack of it. His dreams changed as well. He told Paul McCarthy, the affectionate friend who called him twice a week when he was in Paris, that he had a dream about his paintings, they were carried one by one. Time wasn’t moving onward, wasn’t moving at all. His last piece, The Invisible Sculpture, 2006/2007/2015 is a crate whose content changes size every time the container is opened. Open Paris, here is an other man, a new Al Payne, maybe taller, flaneur. “An old debonair man in a suit,” says Mara, “interviewed by Yves Klein’s daughter!”

Who was Al Payne? “A very sweet man” Mara McCarthy says. Her eyes in search of a figure that was a name, a story heard in her parents voice much more than a real person. “I don’t know, I don’t know if it’s me or my mom, who always told Al was the sweetest person in the world.” Odd coincidence, Al Payne left his painting on earth when he moved out, for his last journey, in September 2007. The same month and year in which Mara opened The Box, an L.A. art gallery she runs in collaboration with her father Paul.

On January 24, 2015, at 4 in a sunny afternoon, the Box made Al Payne’s dream a real thing: the wooden sheds were in the building with their big mouths open: from a truck parked outside the paintings were transported one by one, by hand, into the sheds. They will stay there, unseen, the whole time of the exhibition. The moving display (theory) of paintings was art for the time of a quick, imperfect view but also, unmistakably, a mystic exposure of the artist’s body spread in his work. 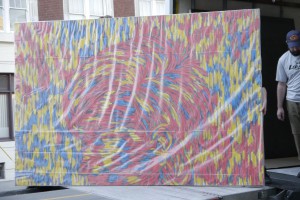 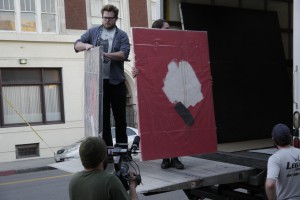 From Shadows by William Carlos Williams

Ripped from the concept of our lives and from all concept somehow, and plainly,

the sun will come up each morning and sink again.

So that we experience violently every day two worlds

one of which we share with the rose in bloom and one,

by far greater, with the past, the world of memory,

the silly world of history, the world of imagination.

Which leaves only the beasts and trees, crystals with their refractive surfaces

and rotting things to stir our wonder.

Save for the little central hole of the eye itself

into which we dare not stare too hard or we are lost.

things the imagination feeds upon, the scent of the rose, startle us anew.