KEATON MACON : the feeling of that day

It is typical of the artist Macon – a constant challenge to the flowing of life. His effort is endless like Allan Kaprows’s story of Pick Up Shadow: you are on the sidewalk on a sunny day, see your shadow that follows or precedes, never gives up with you. You turn to her with a zest of competition, and slowly start sending your hand down to pick it up wishing to take her by surprise, then quickly stick it into the pocket of your jeans. The shadow is still there and you continue, to the end of your breath. In 2015 Macon had imprisoned in audio cassettes the voice of each day of the year. The exhibition included the complete library of cassettes, each one with the date on the back, and drawings on the walls in which the tapes had escaped the cassette and made visible —through the graphite pressure—  the artist’s feeling of that day.

In a new series of drawings the black walnut frames fill the role of the cassettes, containing and protecting. The idea of the frames came first, the content was still a void.  And the frames were the flash of a black walnut tree who died in 2016. The slab from this tree was purchased in a lumber yard. The  tree was gone, his presence though was preserved in the artist mind, inside his skull, one more container. I’m wondering whether the artist feels, secretly, he is  not different from the tree: a witness. As an artist he can shape one moment for the people to see, one image isolated from a much larger story. He puts it down on paper with care for it is a newborn, reproduced words or faces, like the tree puts his leaves down, one different from the other. Mother nature’s  art: visible foliage, and hidden volume of rings.

Keaton can capture the surface of a trunk, the skin of the wall that replaced his favorite palm tree in Korea Town, the linear features of three presidents’ faces. The thickness of time escapes his pencil. That is in the frame. The trunk, in pieces, showed him the physical trace of aging in the rings. Counting backwards from the last one, Keaton saw an image of time produced by nature, as mysterious and alien as our shadow. Humans did not participate in it’s making. Instead, they danced their crazy history in the span of each ring. The wood was cut by the artist following specific groups of rings, and gave him a few black walnut frames: time itself, materialized.

1979 -1970   The frame embraces the years of Mary Tyler Moore’s successful career as an unconventional, funny working woman on TV. Like the characters that have multiple lives in family stories way beyond the real time of their performances, (I had Buster Keaton and Ridolini in my family mythology),  Mary Tyler Moore was familiar to Keaton through his mother’s words. His own direct experience was of Mary’s departure from life the 25th of January, a few days after the Women’s March in Washington DC, January 21, 2017, the day after the inauguration of president Donald Trump. One of the largest protests in U.S. history. Prophetic.

1992-1984 “I used to live in Korea Town. Periodically riots exploded, some palm trees were on fire. I took photographs after the fire. As if following the cyclical nature of social movements, I kept going back, doing little journeys in my old neighborhood. New buildings had replaced the trees. In front of a church a girl gave me a flyer.” Keaton Macon

1968-1963 The Greatest of All Time and The Southern Strategy. Contrasting feelings quiver with these words: sarcasm for sure, respect for a great basketball player, along with horror in front of political attacks on his people, and to himself as an African American artist. To bring LeBron James onto the same page as Nixon, Regan and Trump shrunk into only one face, is a kick into history’s waves, a tiny boat navigating hard times toward the shore of surviving. I love this piece. At the Quicken Loans Arena in Cleveland, Ohio, the Republican Convention nominated Donald Trump in 2016. Same year, same arena, James won the championship. In the meantime, the “Southern Strategy” enforced by Nixon since 1968 has not disappeared.

Today, March 11, 2020, I look at Macon’s drawing with a special emotion. The “South,” Southern people, especially African Americans, have voted for a white Democratic candidate in unprecedented numbers. They have enforced the process —I wish— to change the Head of this country. As if the South had become a human vessel of hope. Many vessels, included the small and fragile by Keaton. It’s worth reading a Wikipedia text about Nixon’s strategy, because history has twisted teeth.

‘Although the phrase “Southern Strategy is often attributed to Nixon’s political strategist Kevin Phillips, he did not originate it but popularized it. In an Interview included in a 1970 New York Times article, Phillips stated his analysis based on studies of ethnic voting:

From now on, the Republicans are never going to get more than 10 to 20 percent of the Negro vote and they don’t need any more than that…but Republicans would be shortsighted if they weakened enforcement of the Voting Right Act. The more Negroes who register as Democrats in the South, the sooner the Negrophobe whites will quit the Democrats and become Republicans. That’s where the votes are. Without that prodding from the blacks, the white will backslide into their old comfortable arrangement with the local Democrats.’

1959-54 So it happened under the eye of god, might he/she/it have only one eye? that good and bad things became titles and words on the newspapers’ first page. The artist passed them through the filter of his soul, the ones hooked to his life.

The ‘wetbacks,’ (the online dictionary defines them immigrants from Mexico, mostly illegal), workers whose backs are wet, are brothers to him. 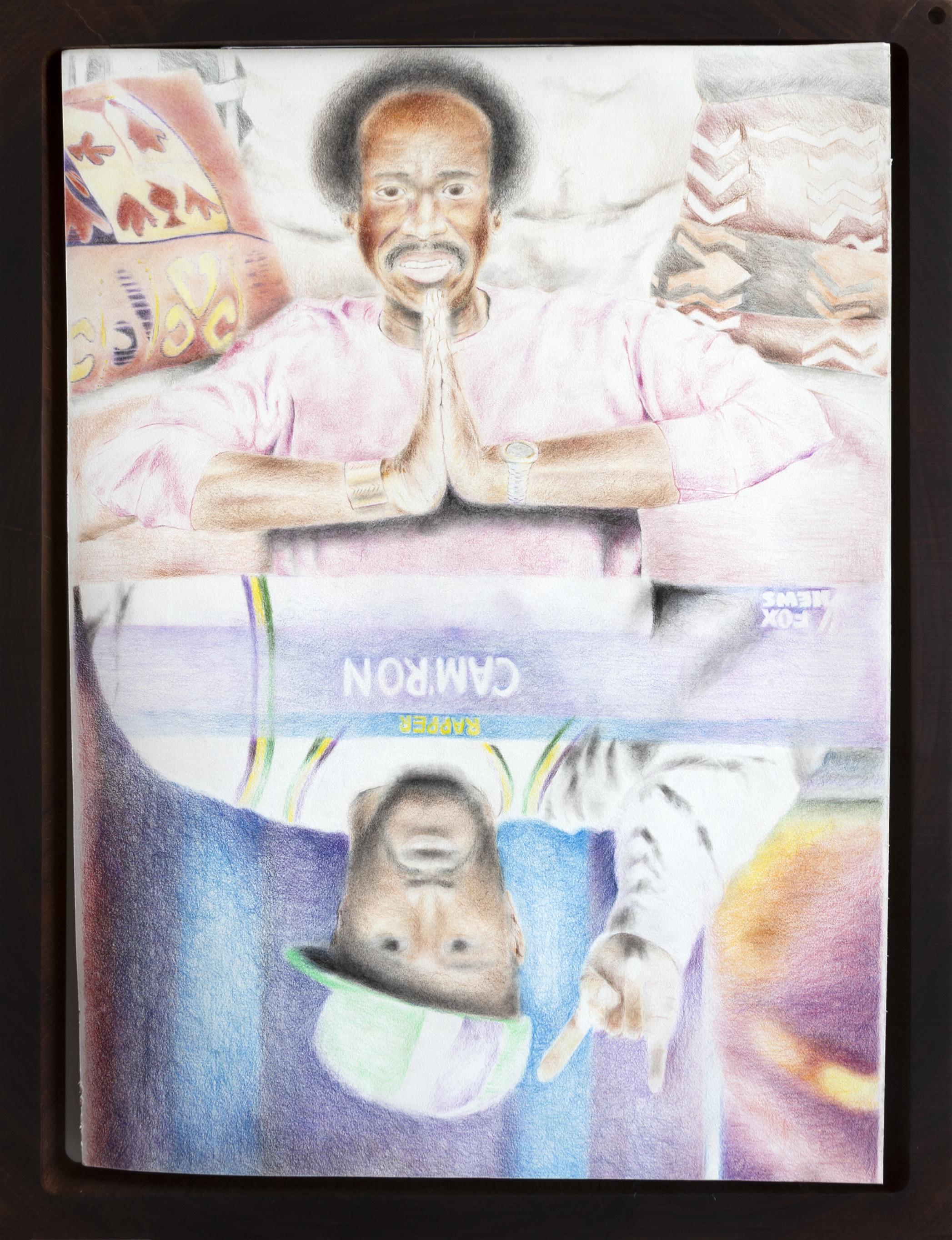 2016-2008 “That’s the way of the world/Do Ya Thing (Remix)”  here the artist goes back to the life cycle, life playing numbers and days, life the slave of time, the strange entity that god kicked down from his domain over the clouds, as he was mumbling: time is for my children not for me.

The drawing is a portrait of musician Maurice White, who stopped breathing the very day of  Cam’ron’s birthday, waiving from afar to the Harlem rapper. As in a card game, chance is the power.

We die with the dying:

See, they depart, and we go with them.

We are born with the dead:

See, they return, and bring us with them.

Are of equal duration. A people without history

Is not redeemed from time, for history is a pattern

Of timeless moments. So, while the light fails

On a winter’s afternoon, in a secluded chapel