In the exhibition ‘The Table Portraits’ at ROBERTS PROJECTS, Culver City, CA – September-October 2018 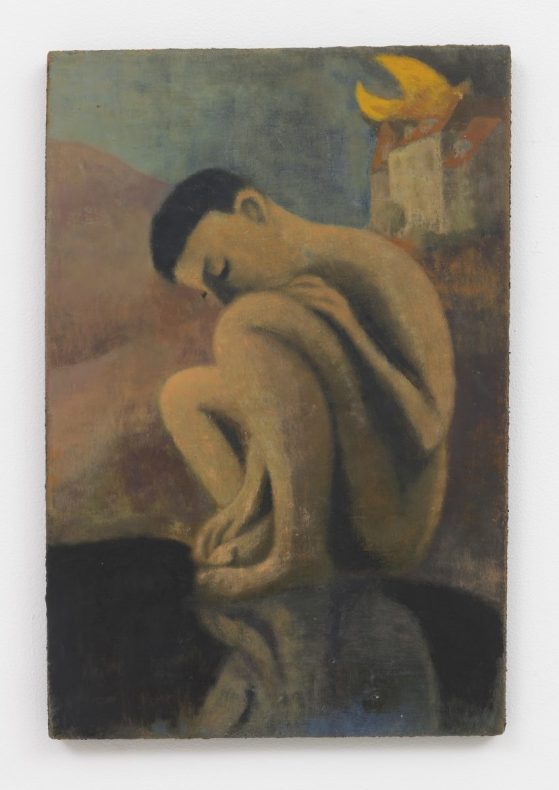 “I like the way the art world is changing in the last few years, especially since Trump and #Me Too, there is more focus on relevant topics, psychology, society – which for me is often more meaningful than art about art.”  Lenz Geerk

The sky is flat and gray over the rain. As gray as the pages of a book Geerk painted with no words inside; only a small branch with leaves  appears, it might be an alien presence.

There must be something personal I share with Geerk’s paintings. And it is not only a sense of familiarity with a painted world explored by Italian modern artists from the beginning to the middle of the 20th century, such as  Massimo Campigli, Mario Sironi, Filippo De Pisis, Giorgio De Chirico, Carlo Carrà and others – even Amedeo Modigliani. Their sceneries were often called ‘metaphysical.’ Big word in these days, I let it go. Perhaps these Italian artists only preserved an ossified gallery of figures and buildings to replace a landscape of ruins dominated by wars and misery — humans and cities under the same spell —  with imaginary monuments of their minds. Artists avoided resemblances to reality, bringing to life new under-cover mythologies wearing beauty and distance. 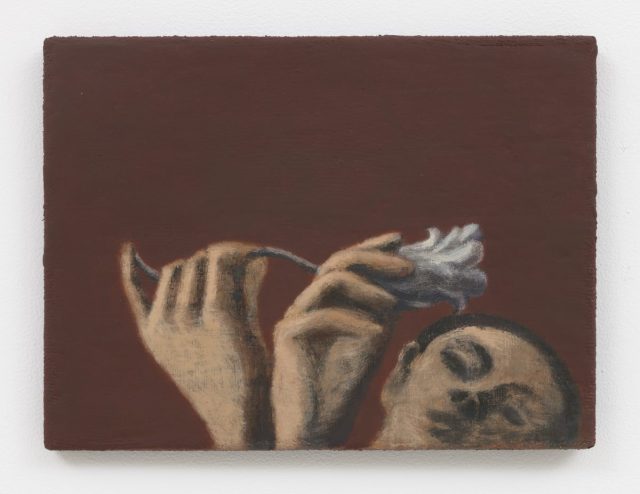 Although holding some vague echoes from the past, Lenz Geerz figures belong to this present time, and are completely physical. I meet him here. And  I need to keep his painted images as soft as the compressed wool on which they appear. I want to see them through the body of the painted world, many steps before understanding.

They are all equal in their lack of gaze. Their eyes are closed or they look down, absorbed by the body itself or by it’s action: eyes focused on a gray flower became gray, maybe thinking of a dirty look. Pupils lost among gray pages are opaque, inert like felt. It seems the act of throwing the gaze around, or looking far, is deadly dangerous. The grabbing is questioned: long fingers more like flowers stems than bony limbs, touch  without trying to possess, to appropriate. Yes, reality as we know it has become a disturbing, invasive machinery. The artist isolates his creatures from the ordinary, tired visual language of our time, he lets humor and tenderness take shape apparently without effort, a blue flower on his belly. He is not protesting nor letting go, he calls for intimacy, introversion, and pensiveness.

These bodies  expose themselves and in so doing they conceal their own secret. Folding, throwing the arms in odd gestures, or magically sitting on the water, birdlike, in a space out of time, they could be boneless figures finally free from  the renaissance myth of the man bringing the whole reality into the measure of his mind, and replicating the fruits of his intellectual power until he can’t control them anymore and starts devouring them, like Chronos with his children.  There is the pressure of reality, but Geerk’s painted images resist, their secret untouched. I don’t want to break it, do not know what the artist had in mind, but I have to the impression to breath a secret pleasure of solitude.

“They are more than leaves that cover the barren rock

They bud the whitest eye, the pallidest sprout,

New senses, in the engendering of sense,

The desire to be at the end of distances,

The body quickened and the mind in root.

They bloom as a man loves, as he lives in love.

WALLACE STEVENS, The Poem as Icon

Each painting is filled with interrogative figures, they are human and yet, they seem to miss something. Their state of mind is sucked into their body. A head, her long dark hair and the hands turn into silent, physical language: while she heavily lays her jaw on a table her hair and hands expand, growing bigger as cats know how to do. It’s a humanscape shaped by sleep’s heaviness, an island smothered by a coat of snow. 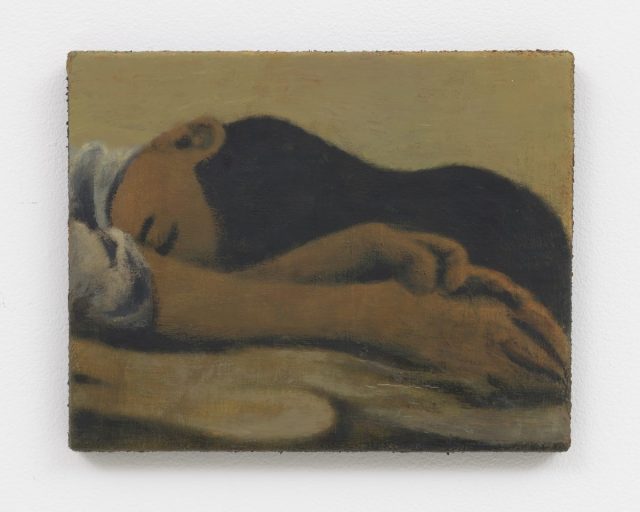 I see myself as one of those figures, a twenty-seven year old woman turning her eyes inside her own body dumped in a large chair surrounded by palms, in the hall of a Parisian student housing. Daydreaming, she was lost in the palms’ movement: hands with more than five fingers, too weak and floppy to grab anything around. In Paris she was completely alone for the first time in her life. She was confused. Suddenly the barricades of books she had physically built in ’68 during the student upheavals, and the imaginary ones she had constructed in her mind, trying to make sense of an incomprehensible decision her parents had taken when she was ten, fell apart all at once.  Dust from the Berlin Wall made her memory even fuzzier. Almost twenty-eight years old! Life doesn’t solidify in the twenties; the only thing one can do is to move on. Her desires had been chopped as well as her hair since she was ten. They both grew again. Not immediately, not fast. I look at her embraced by the chair. I see an immaculate conception taking shape in her mind puzzled by a bundle of feelings. During that daydream, she received a desire of pregnancy she had never had before. I don’t know where such grace came from. From the absence of immediate pressures? From solitudine, perhaps. A few months after, a new life was in her.