When a human abandons the world of senses, his/her/its soul gets demented. 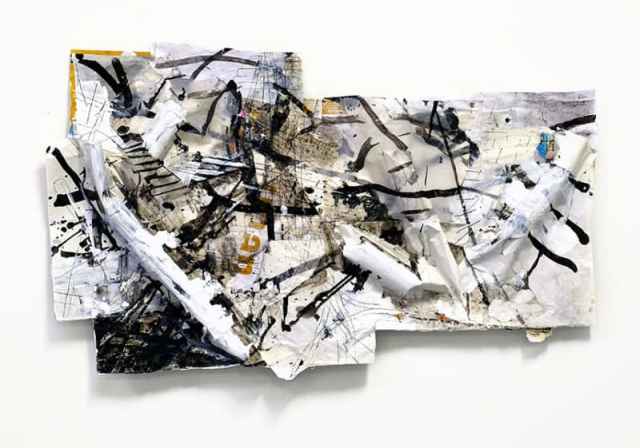 Los Angeles, May 2009. The trip to Philippa’s house in San Pedro by bus and train was three hours of damnation. But Philippa was there at the bus stop, waiting for me, the exact moment I arrived. Looking at each other’s face, we could read it with no words as Maori do in New Zealand. Accidentally, we are the same age, she is one month younger than me. Although Philippa isn’t a Maori woman, like them she can go through human or material density as if bodies weren’t obstacles. In her mind, the buildings where she lives are bodies around her own person, or sometimes scattered parts of her.

She is a painter.

Like birds, she migrated from Ponsonby NZ to San Pedro, from Los Angeles to Australia and Europe, and now she is back in Ponsonby. Her nest on the hills. Paintings and drawings help her keep track of life, as if a bird could rub the feathers on the narrow space of a canvas, depicting and revealing vectors, figures, the intensity of the flight, the frequency of the heartbeat.

As Robert Rauschenberg would say, she can’t make life or art, and has to work “in that hole in between, which is undefined. That’s what makes the adventure of painting.” Almost ten years after our first encounter, I happened to stop my eyes on Philippa Blair’s works on paper she made in 2015. This post is dedicated to them. 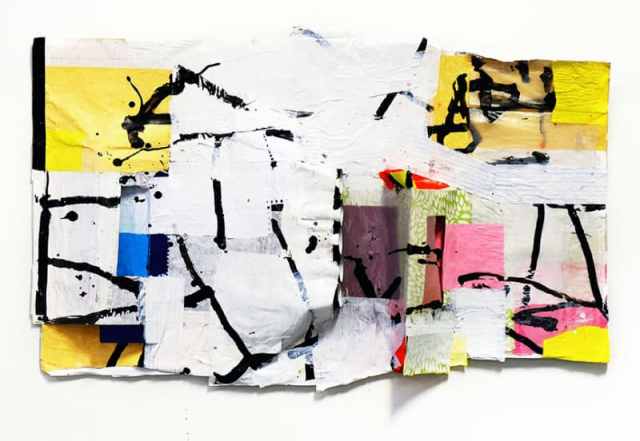 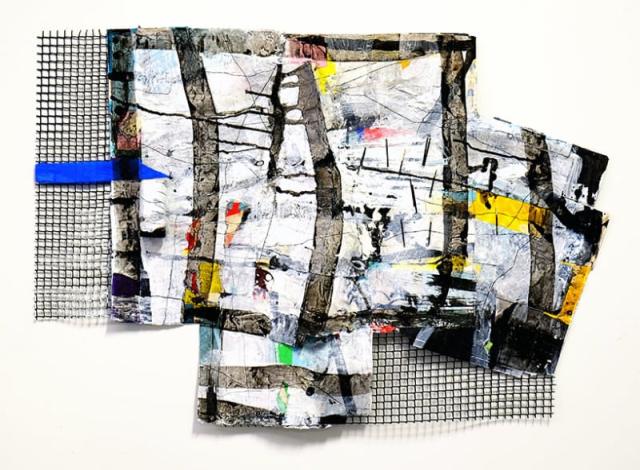 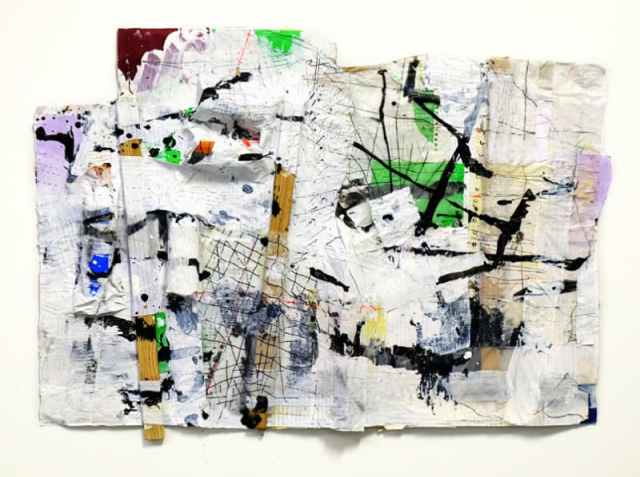 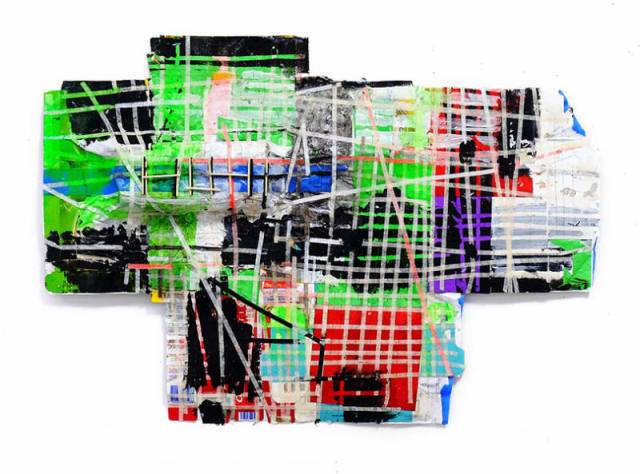 Little by little, surprised at every piece, my brain is revived by the reasonable, friendly closeness, in the same space, of broken parts removed from any functional duty —as it happens after an earthquake, or social turmoil. Different languages in the same brain raise unpredictable barriers one against the other, producing stuttering or silence, or a closed door. Yet each piece is one place, the visual configuration of only one ideogram.

Each place gives support to what remains of an implosion: because they were blotted out, lines and colors readjust themselves on an irregular landscape as if learning to smooth down tensions or pain. Soft is the white, spots of color reassert a new explosion of beauty: maybe self-sufficient, I’m tempted to say ‘natural’ in a physical process, but words fail me. They can’t replace the secret of perception.

Is the artist blowing underneath the paper’s fragile surface the breathing that inflates her chest? Paper can’t hold it so it needs rolls or sticks or cardboard filling the space, sculpting a landscape. Wind inflates a forest: the trees are curved, while the carriage of light following the hours stretches fragments of color between the branches. (Terrain)

Oh no, not abstraction at all. They are paper works, basically black & white. Black lines break and disconnect, they are the opposite of lines of words looking continuous even when thoughts are not. Although the grid of life is always there, it is at times crumpled, other times rigid, never imposing a predictable order. The heartbeat prevails. Paintings? They could as well be visual songs of a mind burning edges, borders, and final forms, in favor of fluid sceneries sucked into the artist’s black hole inside her, to be emotionally reconfigured. They can’t be flat. 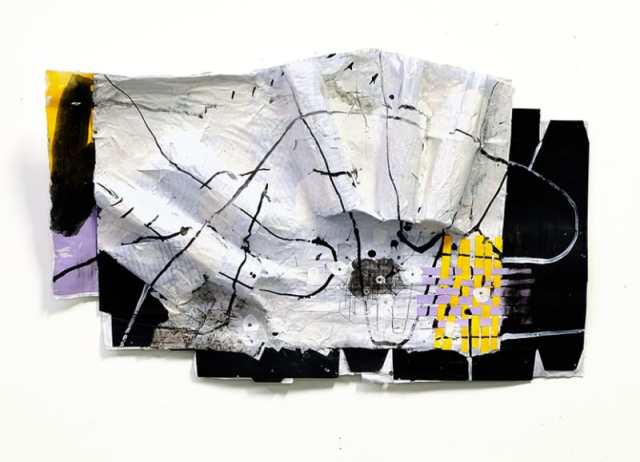 They are flashes of life with some hope of love for the crazy world we share. 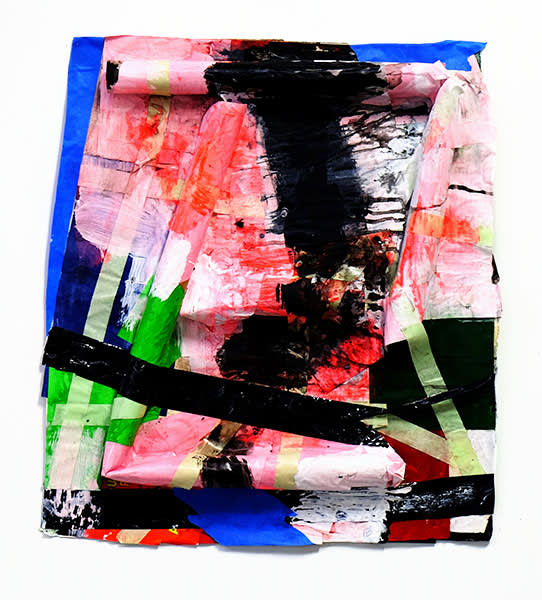 Your heart is a book of paintings,

You have come to sing,

to make Your drums resound.

You are the singer.

Within the house of springtime,

You make the people happy.

With flowers You write,

with songs You give color,

with songs You shade

those who must live on the earth.

Later You will destroy eagles and ocelots:

we live only in Your book of paintings,

here on the earth.

With black ink You will blot out

all that was friendship,

to those who must live on earth.

We live only in Your book of paintings,

here on the earth.

I comprehend the secret, the hidden:

men through and through,

we all will have to go away,

we all will have to die on earth.

we all be erased.

we will dry up

Philippa’s life precipitates in her paintings without blocking in permanent forms the fleeting, indistinct movements of the visible world. The paper can barely contain her effort of breaking chains, melting objects, building broken castles for feelings and tracking the rhythm  of a perpetual change, which is never the same, but not for a change of time and space. It is the artist  floating in her own boat, through her own spirit, the one who makes them new.  She gives to her figures of paint the freedom of material presences quickly disfigured by their own variation, she lets them go. It’s a flux of time that only happens, and is present time.

**Technicians of the Sacred, edited by Jerome Rothenberg, 3d edition revised and expanded, University of California Press, Oackland 2017. “From Mexico & elsewhere in Mesoamerica arise generations of pre-Conquest poets & books: a written tradition that reenforces & expands the spoken one. … Above all, Nezahualcoyotl (1402-1472), author of more than thirty surviving compositions & chief of Texcoco for over thirty years. While the tradition would still seem to be oral, the writings/paintings enter as a real presence: on stone monuments, fired vases, & painted books or ‘screenfolds.’ “(The Commentaries, p. 543)