About THREE FUNERALS AND SOME ACTS OF PRESERVATIONS

It’s a film because images move, but after months of simmering this art piece in my mind, now I see it as visual music, very much as John Cage’s Sonatas and Interludes: simple as dripping water, unassuming textures of reverence for a life we cover as a mysterious distance. 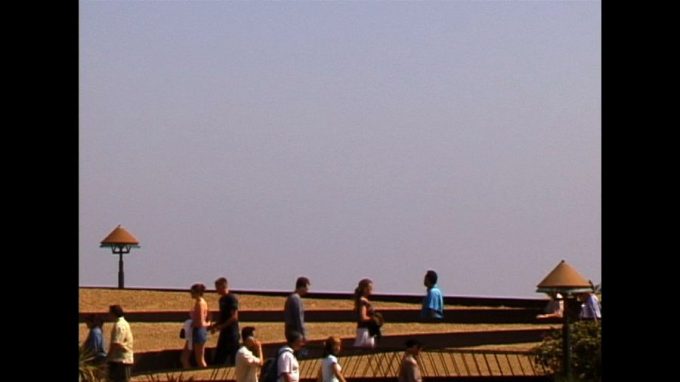 How not to be elusive about death? How to be personal and elusive, personal and intuitive, wearing a dress of courtesy, some hints of humor. Judy’s film is a visual score. Lines of people moving horizontally and of cars rolling on the freeway. Notes are replaced by stories in a natural flow from which rough edges are smoothed out.
One funeral at the beginning, two funerals in the end, and stories of physical care in the middle: the statues’ maintenance.

That’s Fiskin’s quite unique art: to keep courtesy in the face of death. To clean the artwork of most intellectual rules, making art like a veil lifted from life, tied around her face often laughing at modernist obsessions, maybe at any kind of mental constructions. How long do they last? Is there knowing or believing?

Time is the body of films and music. Images and sounds are surfers in a pond of time, they exist as a savor, a perfume. We can only “integrate that savor into the fabric of our own identity.” George Steiner*

“Once we have arrived to a certain life degree, by experiencing and understanding other humans, every relationship, even with our wisest or lovely friends, is only valuable in the atmosphere soaking them completely; and conversations, profound as they can be, have lost the power to give us intellectual happiness; they rather work in us like musical melodies.” Arthur Schnitzler** 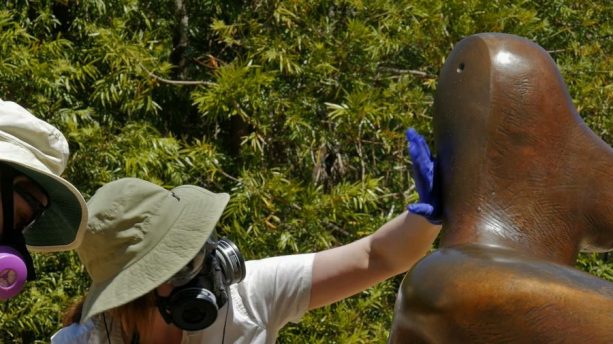 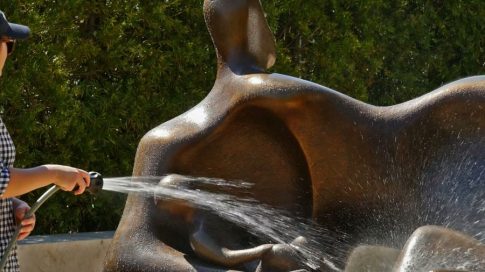 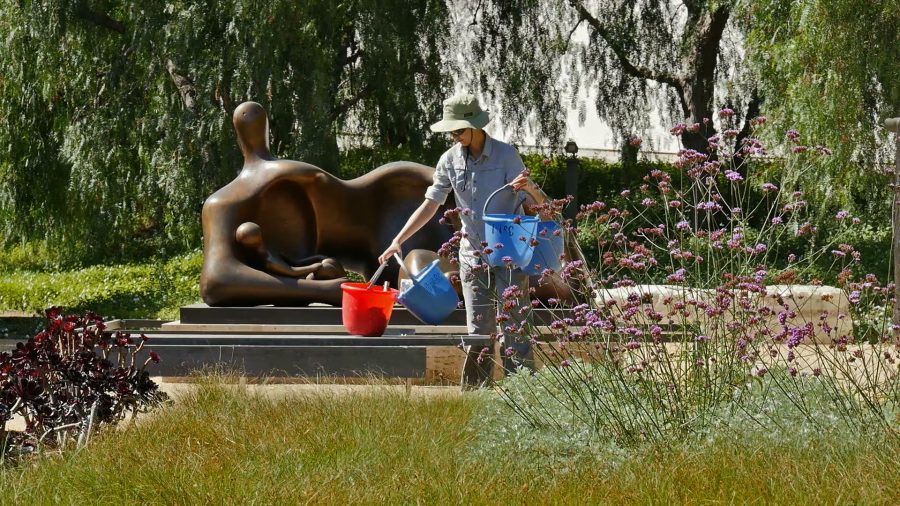 In the film, the sculptures by Isamu Noguchi, Henry Moore, Arturo Martini and others artists of the modern era (only with the exception of Charlie Ray), scattered in the gardens of the Getty Center, are washed and dried as if the Getty Museum conservators’ hands engaged in a caress because they must. There is no love, just periodic maintenance. The sculptures are rigid and heavy forms from day one, corpses. Don’t be mistaken. Judy Fiskin presents them as a trickster would: shiny, perfect, wonderful images that vanish through time. Death is the cord that ties them all, one more string of the music. I remember Homer: shoulders and muscles described as the pride of the living hero, seen at once like future shadows, lifeless, as if Achilles and the other warriors were already dead. This was then, in the ancient times, but now? Art history is a strange museum by itself, calling for veneration, offering exceptional and surprising specimens… do we really care? 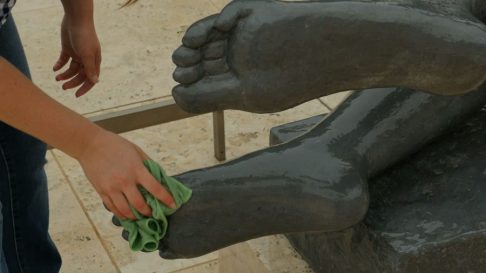 In the countryside house where I was born there was a bronze, the head of Jesus sculpted by a local artist, maybe Celeste was his name but I’m not sure. Jesus was sad. When grandfather died, I was seven, the family put a pillow embroidered by me under his head and the bronze on his grave. It is still my favorite sculpture. Facing death, Jesus was hiding his deep feelings, had a quiet expression. I can still see that face as I think, my eyes open. Grandfather used to say that life is so marvelous, something must continue after the threshold is passed. It was faith in a non religious artist.

Judy Fiskin lights a dim lamp at her window. People and words and images are a simple parade of acts and speeches we modulate without thinking in our daily journey. Common senses, platitudes. I’m not the first naming the aesthetic of courtesy, George Steiner is the master, but as far as I know very few artists of our time place this secret, inner feeling at the core of their work as Judy does. I love it because it’s not only about her, it unravels with grace the way she addresses the viewers, all of us. We are in her she can be in us. Platitude is not flatness, it is life as it is, true and fake, modest and grandiose, a little scary, mostly impossible to fish by words. Not without values.
Civility, courtesy and kindness in these days more reliable than truth.

JUDY FISKIN,Three Funerals and Some Acts of Preservation, Film, 2016 (excerpt)

2016: UNDERGROUNDS : Art, Land Use and Democracy

From July 5, 2016 to an unknown day, at the mercy of nature and other unexpected events. 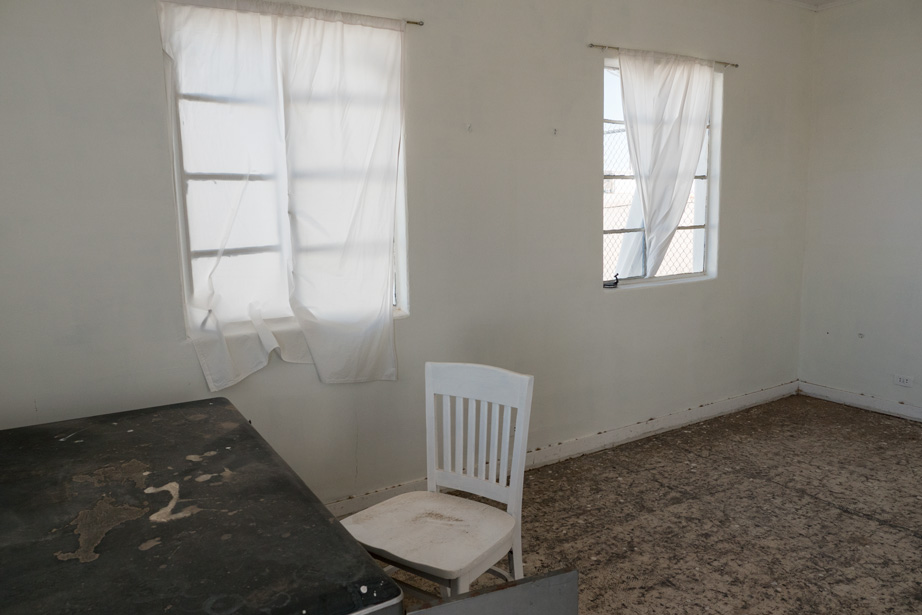 It’s hard to tell if there is or there was Amboy, in the middle of the Mohave Desert (CA). It was an expanded station for travelers journeying on Route 66 by horse, by car or by train since the late nineteenth century. They called it a town because it had a train station, a post office, followed by a motel, a gas station, a church and a few houses. For awhile also a school, that died in 1999. Never more than eighty people were brave enough to spend their life in Amboy over a hundred and a few more years. The local monument is a volcanic cinder cone, bare as a Richard Serra sculpture cooked in the earth’s  belly, overlooking the driest land one can imagine. The whole town has been bought and sold as only one urban body more than once, maybe by charming the newcomers with a faded, modernist look.

“With the opening of the DRYLANDS LAB in 2015, Matza Amboy dedicates its program to the question of water and its distribution.”

ONCE A YEAR FOR FOUR WEEKS it “brings together a selection of artists but also researchers in social sciences, engineers (solar energy, water) and architects.” 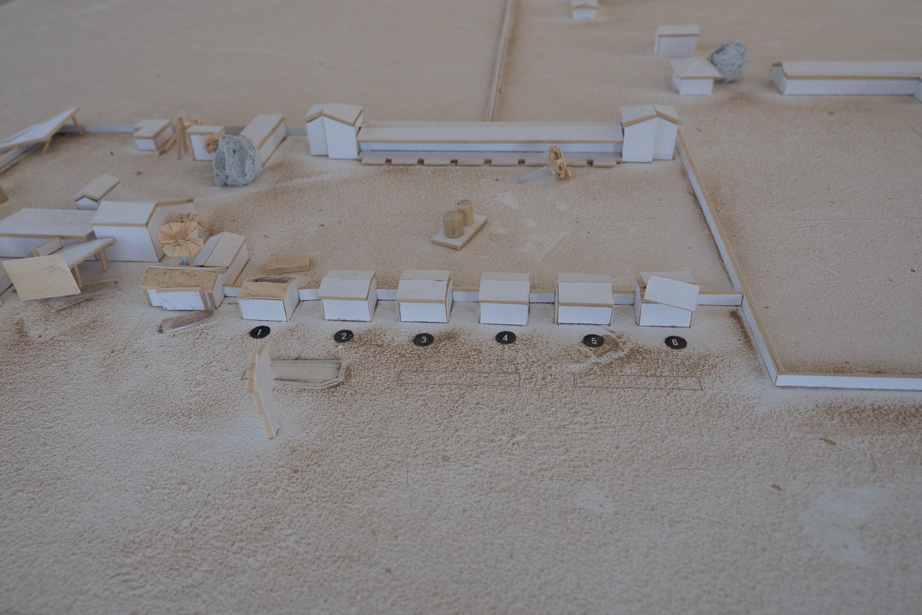 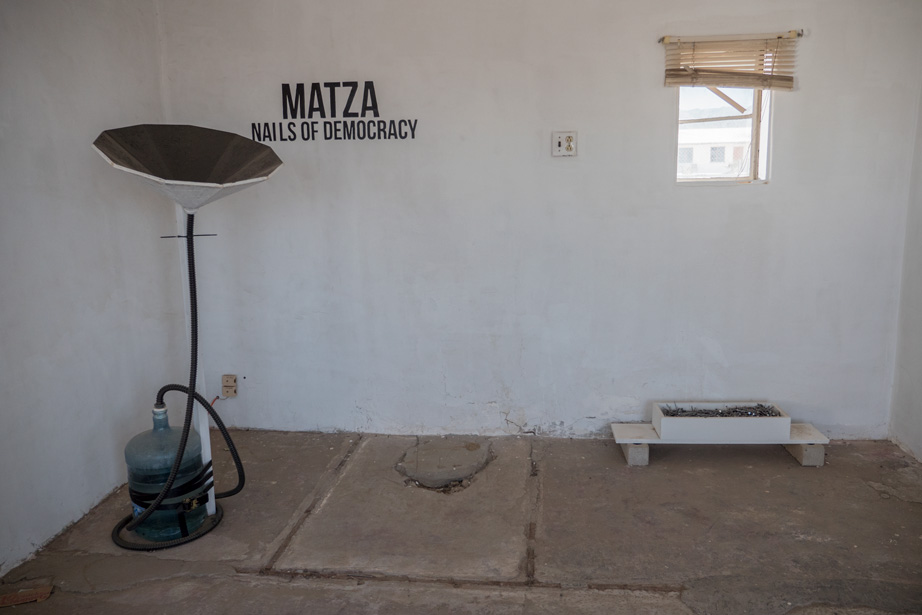 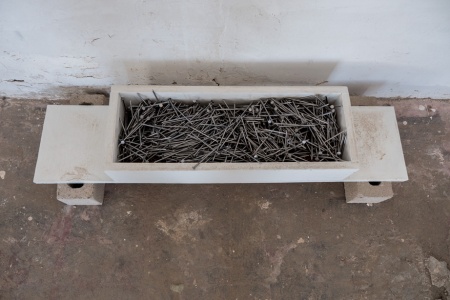 This is the exhibition I saw in Amboy, a population of art pieces shrunk by heat, covered with dust, transformed by the place. Maybe it also happened to the artist this year, more connected to the sense of loss and abandonment inspired by empty distances around the town, a space devouring the meaning of any direction except maybe imaginary lines between Amboy and constellations, planets, moons and meteorites so similar to the surface of this empty land that, at a distance, shines with salt.

“There is no water on the moon”, writes Katharine in a beautiful text pinned on the wall. She describes the desolate rooms of the Amboy School, left as they were at the end of a normal morning, books on the tables and drawings and something written on the blackboard, as if a sudden disaster had forced everybody out, out in the sun, out of the inner spaces in which breath and perspiration were spread and absorbed by the skin, escaping the cruelty of being dispersed in open air. I should see Katharine’s textile banner twisted by the wind; it’s not there. School books, drawings and cyanotypes on display aren’t safe neither, the sliding back of the display cabinet is open: some papers move around on the floor. Peter and I felt entitled to put them back, definitely captivated by open doors, and lack of edges, while the heat sucked our brains out of the skull. Not completely though, we could still enjoy the ideas behind the desiccated or altered bodies of the art pieces. Our and their nostalgia hung to almost nothing, just enough to click on our cultural sensitivity. 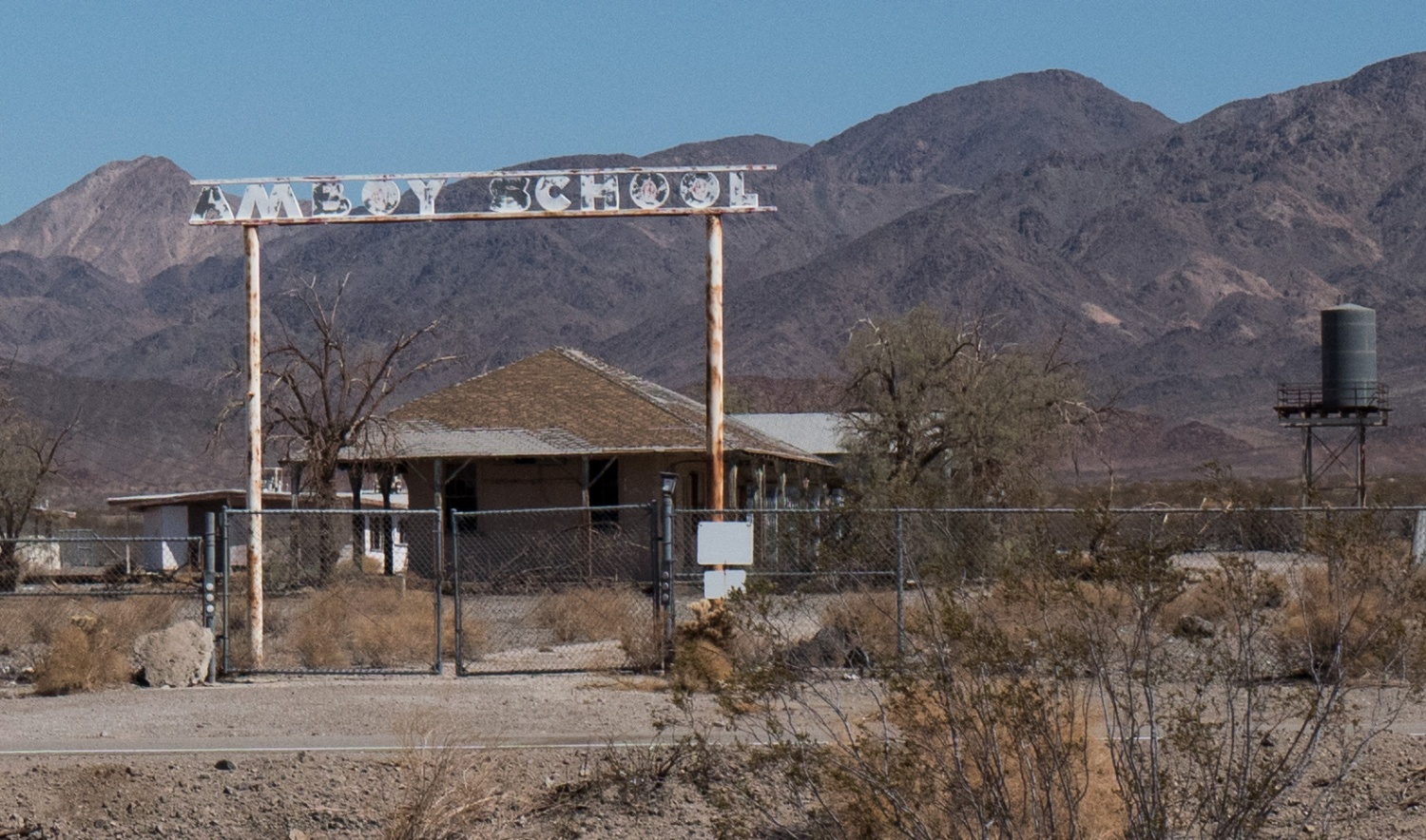 The six white rooms of a defunct motel open their door to the art of visionary strangers with a warm heart. Concepts turn into feelings, giving form to physical awareness of common challenges for all humans: the suffocating protection against global warming in a room; white curtains flying through the windows in another room, the white room that breaths and invites us to look beyond the walls. There is the Post Office in front of the cabins, on the other side of the road. An artist, Delphine, paints a white crosswalk. Illegal! For sure she didn’t know it. Now her white stripes have been covered with black paint. They remained stripes, not very precise on the sides, as if painted with a broom. 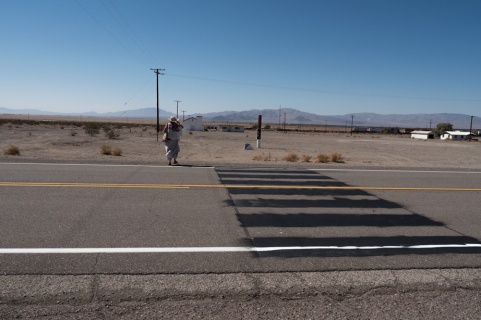 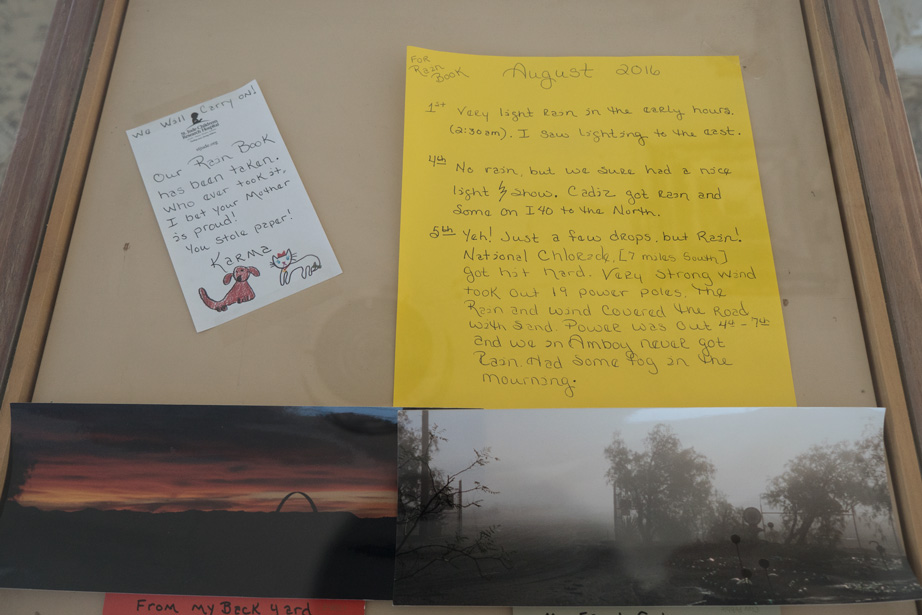 Five weeks of solitude after the artists left, and the nails of democracy brought by Séverin have probably given to the locals the wish to be actively part of the installation, for better or worse. Although the Rain Book was stolen, somebody partially replaced it with two pages for a new rain book: writing about a day of rain near Amboy, and adding two photographs from her backyard. I can’t tell for sure, but I believe it was a girl. It’s great when the art expands beyond the initial, limited object, expanding the idea in other minds, through other fingers. 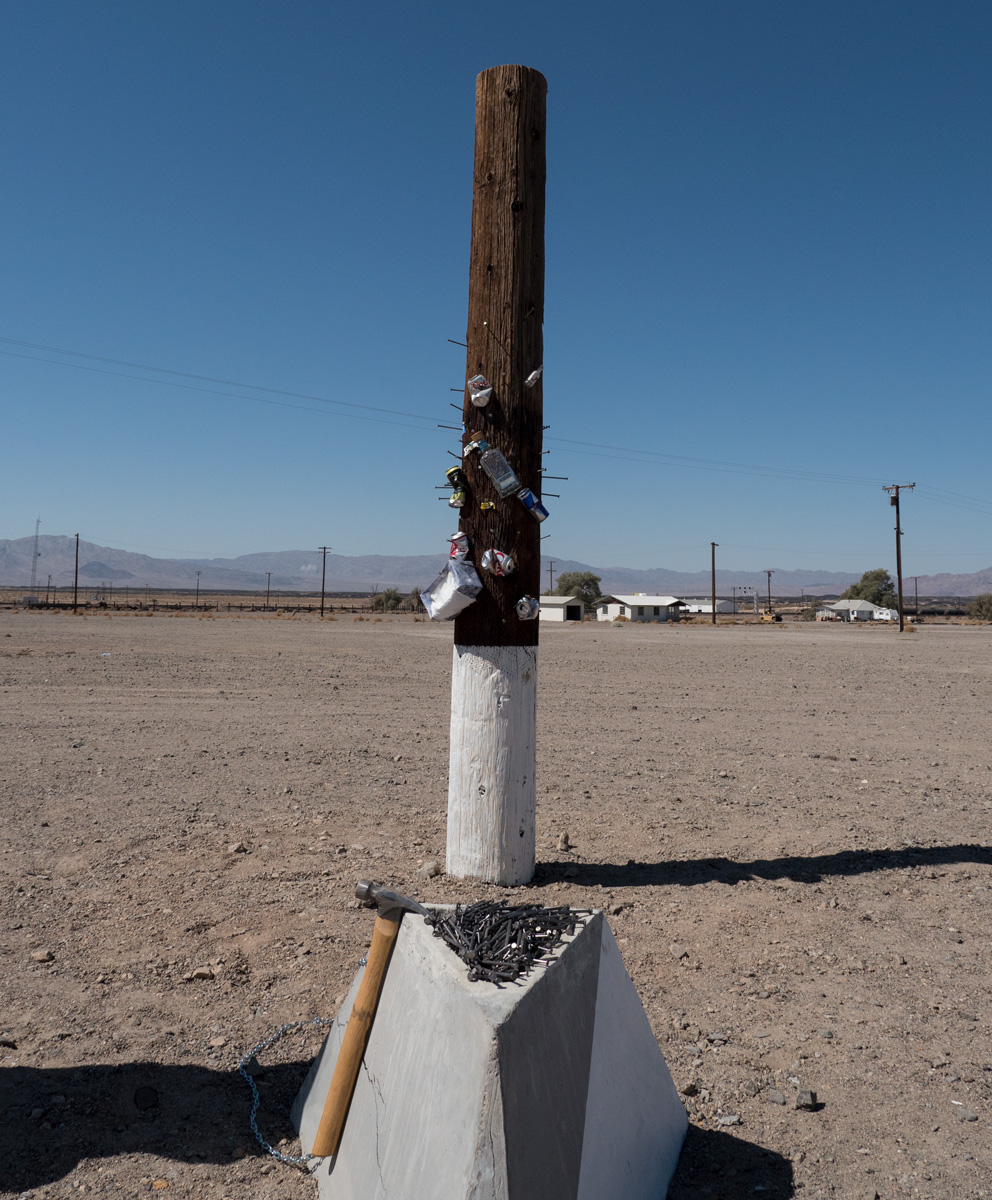 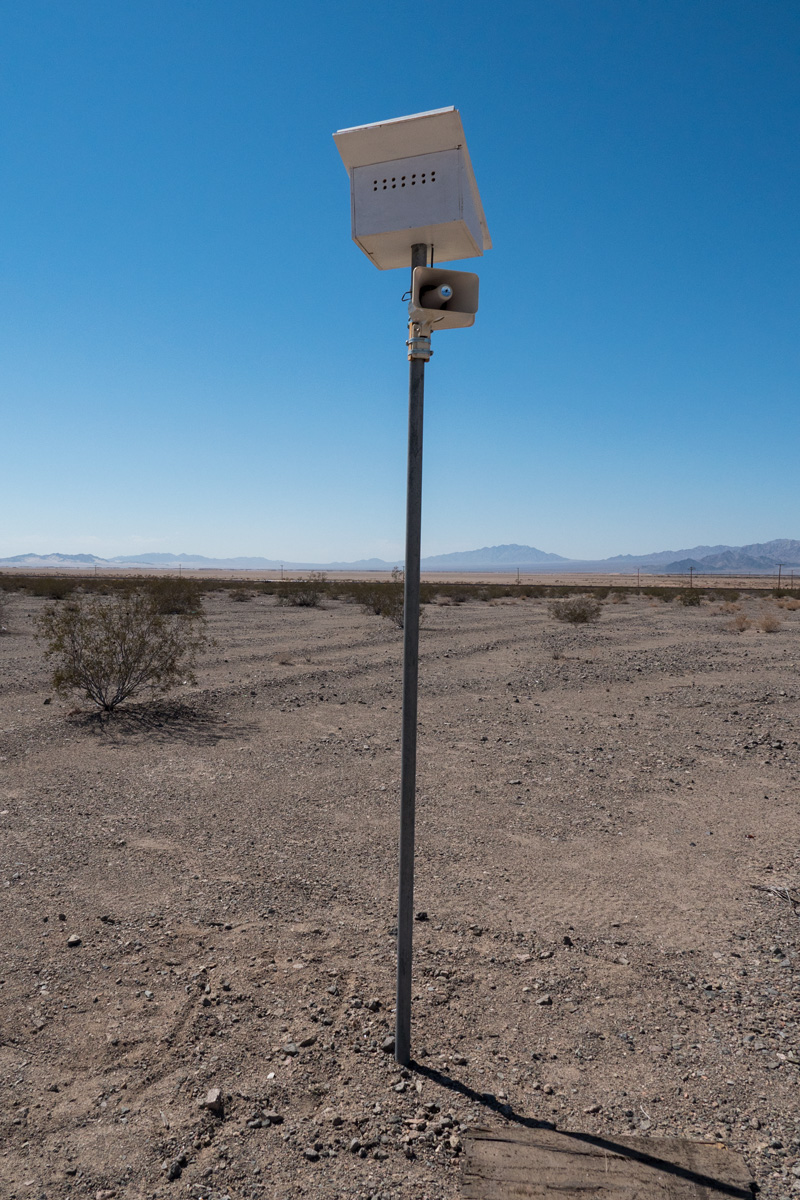 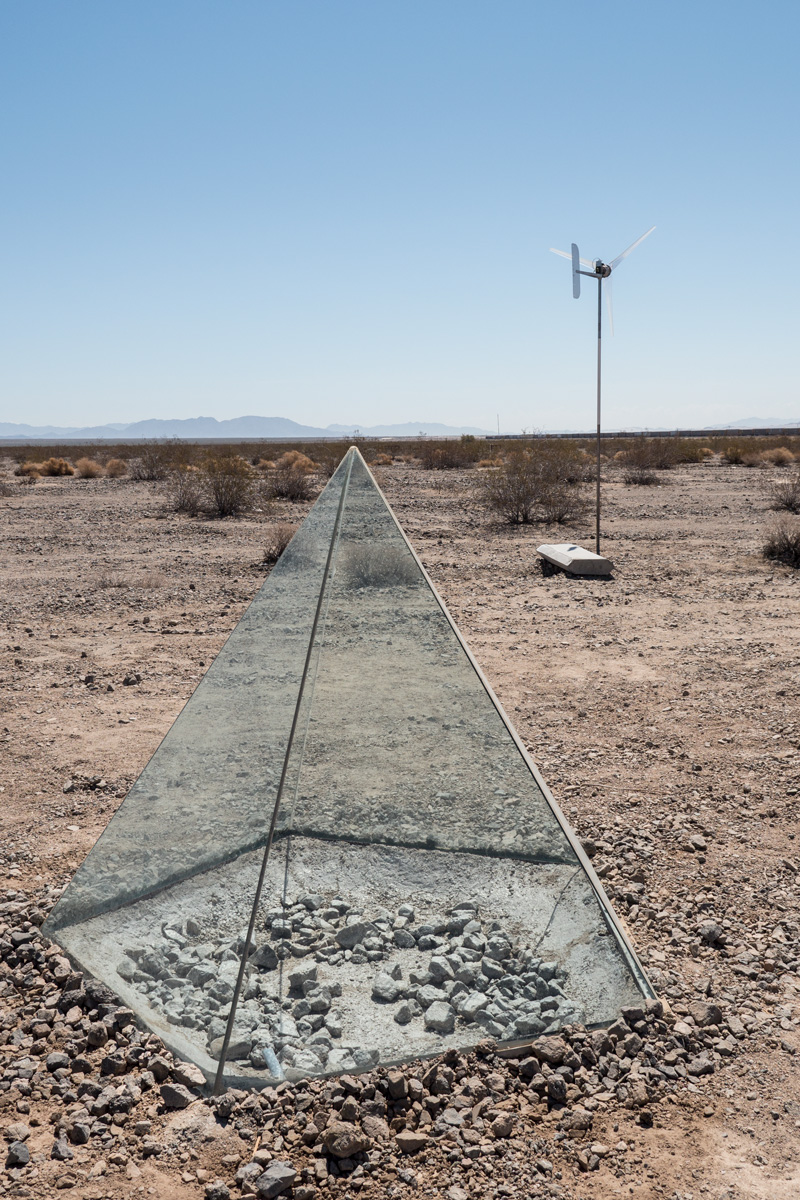 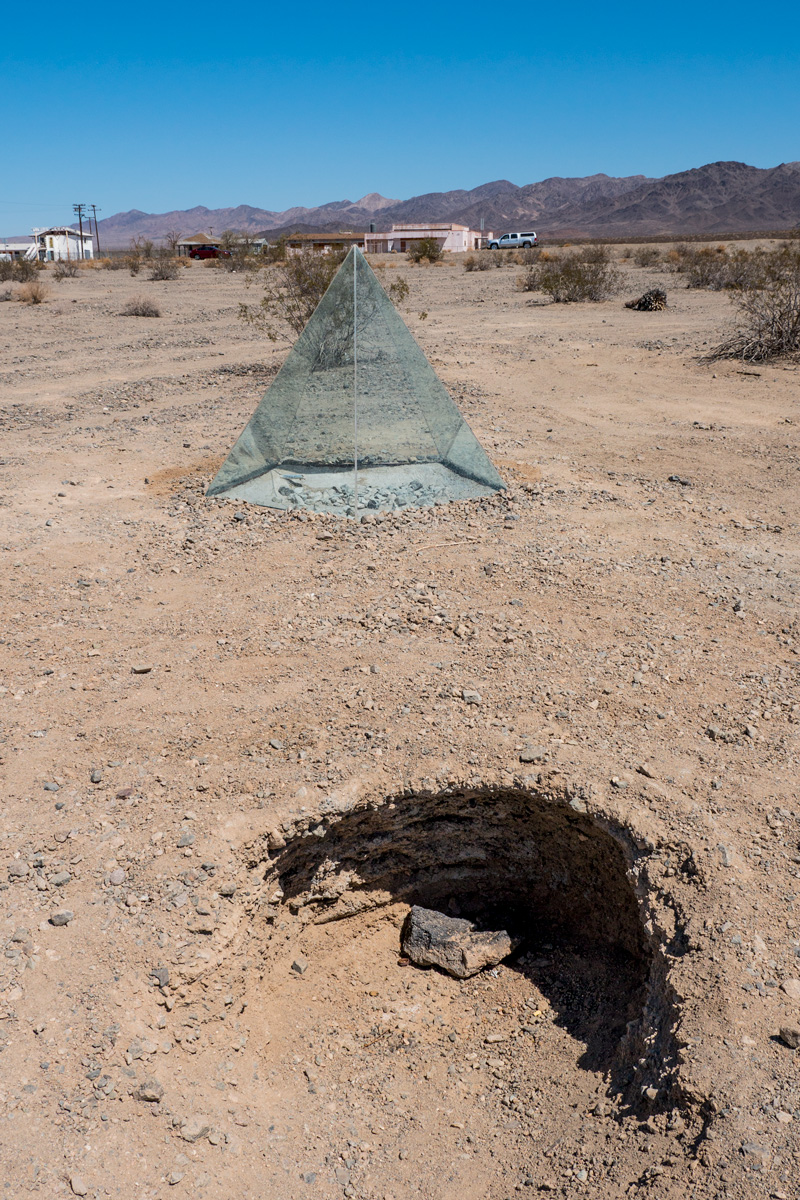 Half of the art pieces are outdoors, not easy to identify because some local sibling keep them company. Dear friends from Switzerland, you have followers!
Maybe they didn’t grab the beauty of the Ghost Drops and even stole the water jar from the excavated hole, it doesn’t matter. The order you brought into the desert doesn’t belong there. That’s why it is striking to touch it, with long fingers from the eyes. The pyramid in small size, the windmill, the hole, the bridge are as basic as the wheel, one would believe that time has vanished, you remade in the American desert symbols of a culture exposed to failure, silence, misunderstanding. Maybe without wanting you all approached Allan Kaprow’s idea of un-art, almost becoming un-artists, “the offsprings of high art who have left home.” 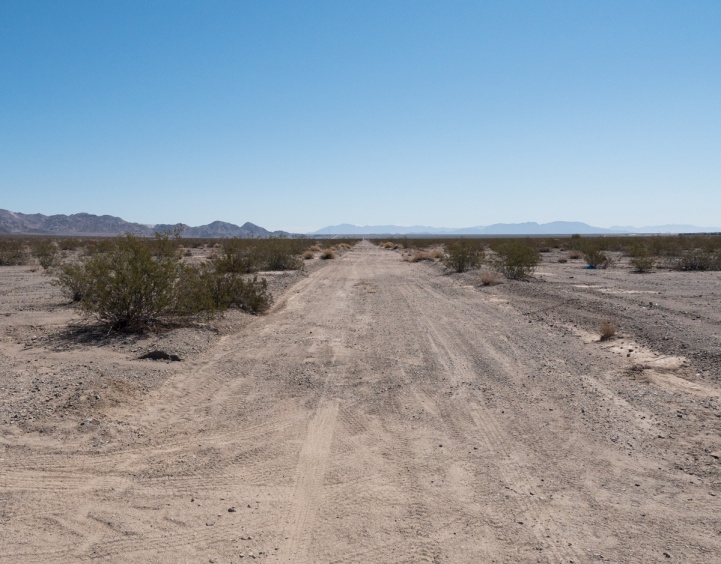 Jardin å la Française, the only piece the goes directly from the mind of the artist to the visitor’s mind, is a revelation in the landscape, not less than the vision in front of a French castle’s over designed garden. There was a moment, after driving guided by your instructions, when I almost screamed “stop!” “It’s here!”
Maybe I was wrong au pied de la lettre, yet I was sure the whole dryland, the bushes and the far away mountains had assumed a sense of order, an imperfect geometrical perspective around an unpaved road whose end could only be imagined. Yes! A sense of enthusiasm made me almost forget the 110 degrees of the air, wind and dust. Not for long. A grumbling noise from the road woke me up. Twelve Harley Davidson’s with their riders covered in black leather stopped in front of the white little cabins, perfectly lined up. Language was French. Laughing, my midwestern husband exclaimed: “order is only cultural.”  Maybe art is not, not completely, and it is for the best. 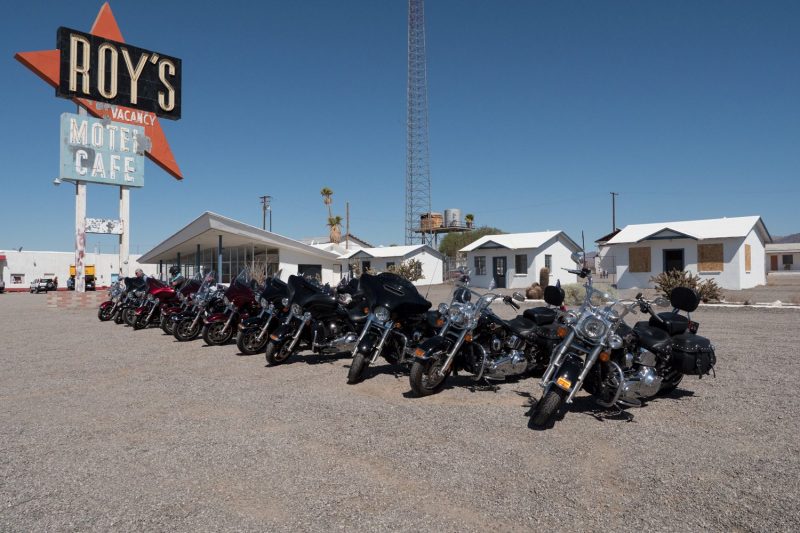