The sun moved on me. It wasn’t supposed to do that. And now it is making the U-Haul shell cast a shadow directly in the area I was going to take a picture.

BY JULIE SHAFER — FROM LOS ANGELES 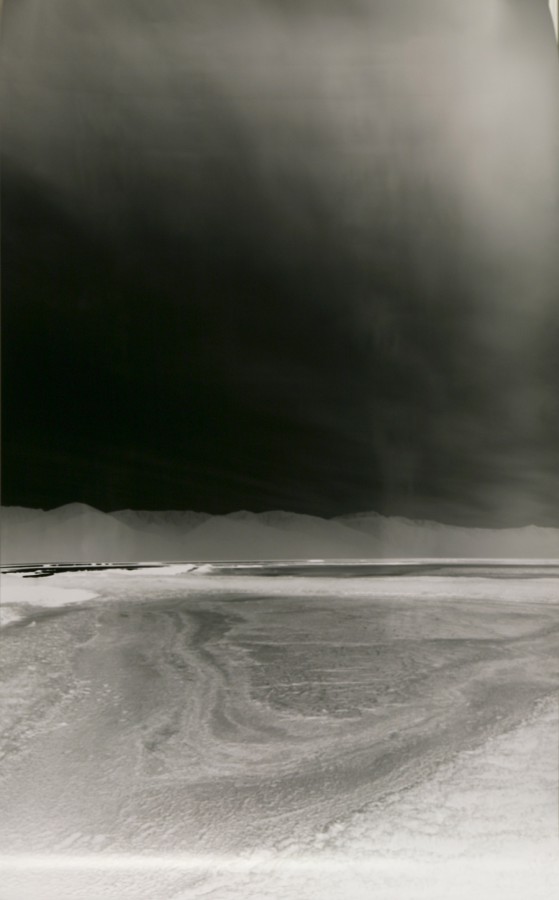 I don’t want a shadow in my picture. I can’t have a shadow in my picture. I’ve already let a lot of the control I insist on having slide saying, “This is part of the process.” But letting my own shadow show up in these pictures was very clearly not something I should “go with,” because it’s “part of the process.” I had been riding the razor’s edge of rolling with what happens, and fucking up. This was a fuck up.

The chemistry is already mixed and in the troughs. I am running scarily low on chemistry, and there are still three more days of shooting after today.

How many oz in a gallon? I know there are 33.8 oz in a liter, how many liters are in a gallon?

If chemistry A is now mixed at a 1:19 ratio to try and make it last longer, how many more minutes will I have to develop my photographs? I develop for 6 rounds of rolling the photo, flipping it 180 degress from the y-axis, through the x and z-axis, and landing back on the y-axis, and then re-rolling. 19 is more than double 9, so I think I should do 12 rounds of rolling.

“Shit Shafer, what are we gonna do?” My lips move but no sound comes out. My left hand forms a gun and points at various spots in the air. My right hand is counting- starting with my thumb. My eyes transfixed on the ground.

Marya sits on a bucket.

Option A: Dump the chemistry into dirty buckets. Break down the darkroom. Drive 15 miles, 90 degrees due North. Set back up and commence working. Lose three hours, potentially contaminate the chemistry, but at least there won’t be a shadow cast in the image.

Option B: Keep the darkroom in tact. Slowly drive the U-Haul forward onto the road, turn the wheels as far left as possible. Let gravity pull the truck backward and maybe there won’t be too much chemistry lost as the wheels transition from asphalt to sand. Lose maybe 30 minutes, potentially contaminate all the chemistry, and potentially lose a lot of chemistry as it sloshes out of the half-pipe shaped troughs holding it.

Option C: Fuck it all. Pack up and call it a day. Lose a whole day. Lose a day’s worth of chemistry. (“Tuh-RUST Mee! Mooohr than Enuf chemistry. Chuckle chuckle. In fact you might even be buying too much! Eyebrows arched – Highly – I don’t care if you wanna buy too much – I mean I don’t work on commission or anything, so it’s not like there’s even something in it for me if you buy more — I just hate to see my customers spending more money than they need to. What you are buying here will last for daaayyyyyzzz.”)

Option D: Leave the U-Haul where it is, and move the camera instead. Walk the camera 30 yards into the sand, take an exposure, walk the camera back into the darkroom. Potentially cause a major light-leak into the camera and ruin exposure, at which point consider referring back to Options A, B or C.

“On the count of three we’re gonna pick it up, and not stop until until we get to the ripple in the sand over there.”

“The one that’s like right next to the mound that’s got a little shadow on it.”

“All the mounds have shadows on them.”

“Three o’clock there is a stick. Follow the stick to the left and you’ll see a mound…”

“Let’s just walk straight and when we get tired we’ll say so.”

We can’t see each other. I wonder what we look like from the road. A floating box that looks like a coffin gliding slowly across the desert floor. We can only lift the camera about 6 inches off the ground. We don’t have room to take a full step, so it’s left-right-left-right-left-right. Each foot advancing about 3 inches at a time.

She said stop, but her voice hit the box wall right in front of her, bounced back and was evaporated by a wind gust. She dropped her side, I tripped, I didn’t let go of the handles on my side of the box. The camera landed on me, and I was face to face with my plywood camera sarcophagus.

I don’t know how long I laid there, but it was long enough for an army of ants to have conquered the mountain range of my body. Where are they going? What is this they’re carrying? How long have they been carrying their bounty? Do they have any concept of how far they’ve traveled, or how much further they have to go? Or is it just one foot in front of the other? 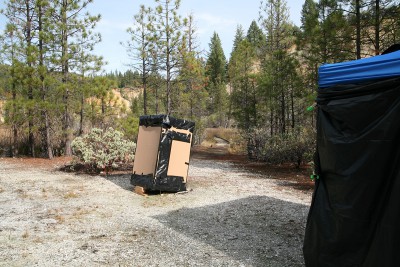 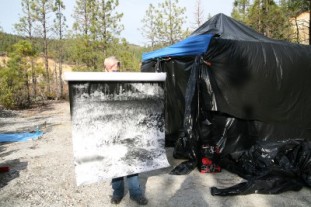