These images were created while driving the same path taken by two men in Laramie Wyoming who kidnapped and murdered Matthew Shepard. The men enticed Shepard, an openly gay man, to follow them outside the Fireside Lounge where he was kidnapped, taken to a deer post five miles away, tied up, beaten, and left to die. He was found alive but unconscious the next morning, by a cyclist who described his body as looking more like a scarecrow than a human. Matthew Shepard died in the hospital six days later. 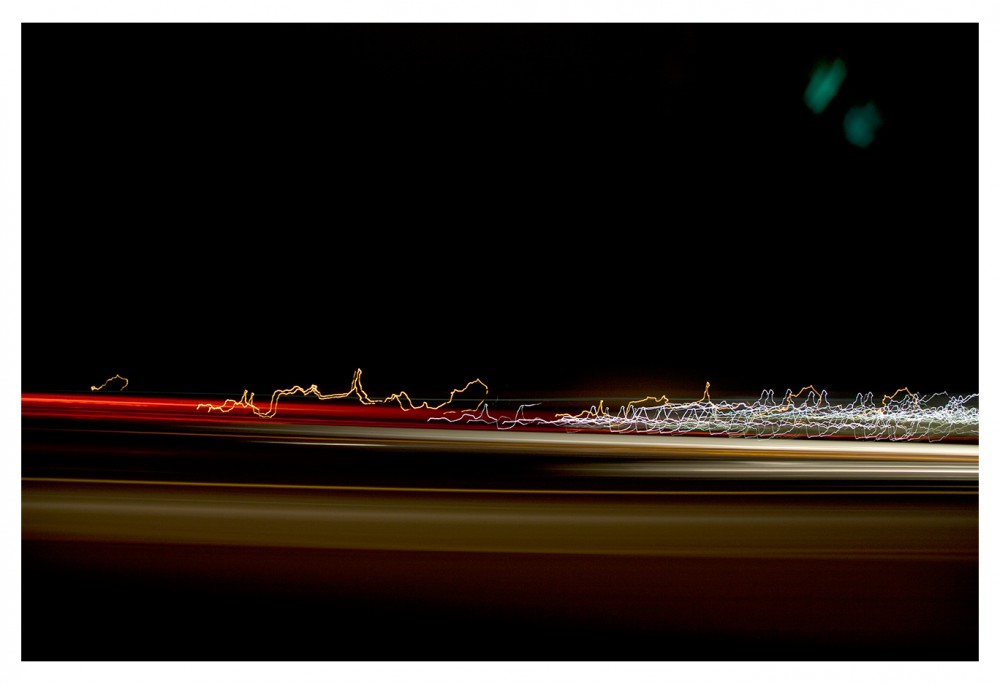 It really didn’t matter to me what the photos looked like, but I was afraid if I left the LCD screen on I wasn’t going to be able to resist looking, judging, altering, trying to make “better.” The point of being out here is to travel the same road Matthew Shepard and his two kidnappers drove, making photos that are a record of that drive. Whatever appears, appears.

I didn’t want to know what the photos looked like because I was afraid nothing was going to record at all. At one point I turned my headlights off so I could see, and there was nothing there at all. The prairie was instantly absorbed into black, and I was floating through time and space. My eyes darted left and right but had nothing to land on. If not for the sound of my tires spinning on pavement I’d be convinced I wasn’t moving at all. Before panic could set in, I closed my eyes. My frenzied eyes continued to dart around, and finally relax once patterns of light appear. These same patterns appear when I close my eyes to go to sleep — when my body is tired but my mind still active. This time they come to help me make sense of this place. My eyes open, headlights back on, and off in the distant is a small light, probably the light of a ranch countless miles away. I finally had something to land on and it made me feel small, insignificant and alone.